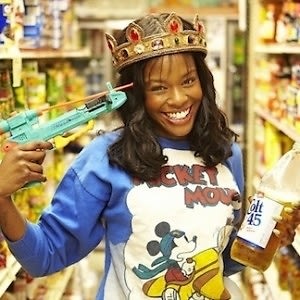 - A main distinction between Azealia and Nicki Minaj is Azealia's fashion. Her style is very simple, wearing yoga pants and a long-sleeve t-shirt in public, not designer clothing. - In an interview with the New York Times, she said she drastically changed her style when she moved an art school. She said,

“That’s when I discovered Urban Outfitters, but it was so expensive. “So I would go to Forever 21 and the Spanish stores and I would put it together and make it look kind of hipster.” “I wear a lot of clothes that’s going to get dirty and look cool once it gets dirty.”

-Her style has been of extensive interest among high fashion icons. She has being photographed by Inez van Lamsweerde and Vinoodh Matadin for V magazine, Matt Irwin for GQ Magazine, Nicola Formichetti for Elle Magazine, and Terry Richardson for a "spring fashion" spread in The New York Times Style Magazine. -Mugler's Nicola Formichetti debuted Azealia's single, "Bambi," during his men’s wear S/S 2012 show at Paris Fashion Week. Nicola is also directing the video for her next single “Licorice.” Check out the song below. - Luckily not making Karl Lagerfeld's "Hate List," she performed at his in Paris last month. Check out the video below and imagine Lagerfeld head bobbing to this song. [NY Times] [Photo via]
4 of 5