It's officially the Holiday season, and officially cold out, which means it is socially acceptable to start drinking earlier (if it gets DARK before five, we can DRINK before five!), and we can load our drinks with extra calories to help us get through the winter nights ahead.-

Here are a few of our favorite holiday drinks:

After Getting Christmas Tree: Hot Cider And Rum

Stud the apple with cloves and stick it in a pot with all the other ingredients (except the rum), and let it simmer. Take out the apple, add the rum, and serve.

Hot Cider and Rum is a perfect, outdoorsy sort of drink that will warm you write up after you chop your Christmas tree/haul it 4 blocks and 3 flights of stairs to your apartment. 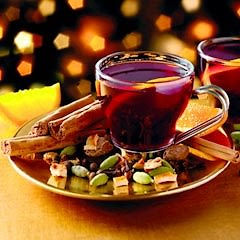 Stringing lights can be really, really frustrating: you're gonna need a drink. Mulled wine can be made by simply heating up some wine in a saucepan, then adding orange zest, cloves, 2/3 a cup of sugar, and cinnamon sticks. Serve it hot, and leave all the seasons in the pan, lest you end up choking on a peel.

For The Christmas Party With Your Friends: Holiday Champagne Punch

A bowl of punch might seem Middle School, but not when it's spiked with a bottle of dry pink champagne. For this recipe, drop two peaches into boiling water and blanch for two minutes, drain, and remove skins and pits. Then puree the peaches along with 2 tablespoons of orange juice and 1 and a half tablespoons of lemon juice in a blender. Add the dry pink champagne and blend until smooth. 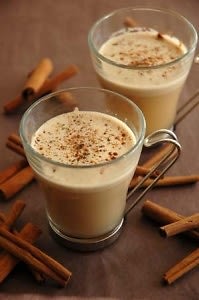 For The Boring Obligatory Christmas Party You Can't Get Out Of: Hot Buttered Rum

What better time to imbibe super caloric Hot Buttered Rum than a boring party you don't really care about? This drink is delicious, and approximately a trillion calories, so you won't want to drink too much of it...but that's ok, cause you're not gonna stay at this party long anyway, are you?

To make it at home, Emeril says to cream together a stick of butter, 2 cups of light brown sugar, a teaspoon of nutmeg, a pinch of cloves, and a pinch of salt. Refrigerate this until almost firm, and then spoon 2 tablespoons of the mixture into 12 small mugs. Pour about 2 ounces of rum into each mug, and then teop with boiling water.

You can buy the really sweet stuff in the dairy section at your grocery store, but it's always better to make it yourself. Alton Brown says to beat 4 egg yolks until they lighten in color, then gradually add 1/3 cup of sugar until it's completely dissolved. After that, add a pint of whole (yes, whole) milk, 1 cup of heavy cream, 3 ounces of bourbon, and a teaspoon of nutmeg together. Then, beat the egg whites into peaks and gradually add 1 tablespoon of sugar. Whisk this then into the other mixture, chill, and serve. Raw eggs, yum!

2 ounces of Vodka, 1/2 ounce of Orange Juice, and 1/2 ounce of Manischewitz if you're keeping kosher this holiday. If not, we suggest you stick to Egg Nog before trying this out....