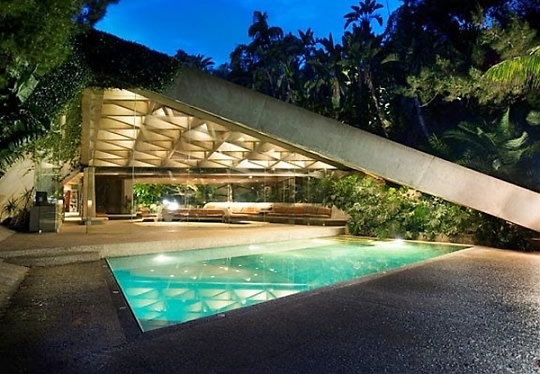 You know it. Jackie Treehorn's Malibu pad from The Big Lebowski is actually in Beverly Hills off of Benedict Canyon. The famous John Lautner-designed home was featured in Charlie's Angels: Full Throttle, has been the site of numerous photo shoots and covered in spreads for publications such as Architectural Digest and Town & Country. Jutting out of the hillside looking like a structure from the future with its sweeping views of the city and editorial-worthy design, it's the ideal space for entertaining. Just like Jackie Treehorn, Goldstein has opened its doors for numerous parties and events, and even had one as recently as Tuesday night. But unlike the fictional resident, Goldstein dispels the rumors of shooting porns there and any involvement in the porn industry. [photo via]
4 of 10