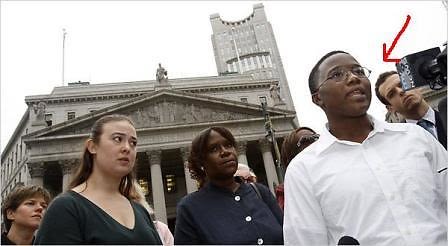 [Photo from the New York Times]

New York, among many other things, is a well know hub for the gays, transvestites, and cross dressers from around the globe. You can wear absolutely anything in this town and not get punished for it (ahem Kenny Kenny)...We have always been proud of our city for the tolerance that it's residents and business owners have shown towards those individuals that fall outside of what is generally considered "normal".  This is why when we hear stories like Khadijah Farmer's we feel gypped. Khadijah is a woman who got kicked out of a women's restrooms at the Caliente Cab Company restaurant in the West Village, by a bouncer that mistook her for a man. "I get mistaken for a man daily" admitted Khadijah, which is not exactly why she is upset. No, she's upset that the guy wouldn't even look at her id card that clearly states her gender, before ejecting her from the restroom and then the restaurant. Which is why the The Transgender Legal Defense and Education Fund filed the lawsuit on behalf of Ms. Farmer in State Supreme Court in Manhattan

A 2002 amendment to the city’s human rights law protects the rights of city residents whose gender expression is different from their sex at birth. This lawsuit could help set a precedent for sex stereotyping by a public accommodation. We say "you go girl!".