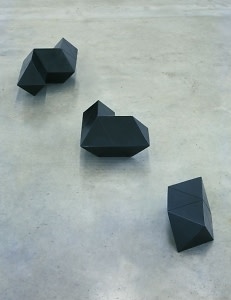 It's a beautiful day here in NYC and that means there's no excuse not to enjoy art against the backdrop of one of NYC's most breathtaking parks. Beginning today, Art Production Fund is pleased to present Tony Smith’s One-Two Three. This three unit sculpture from 1976 was specifically designed for outdoor display by the late Smith, who was the first artist chosen to receive public arts programming in the city in 1967. Art Production Fund has brought back Smith’s sculpture for public viewing to mark the artist’s centennial. Born in South Orange, New Jersey, Smith is considered a leading figure of American Minimalism with a retrospective of his work appearing at the Museum of Modern Art in 1998, and a presence in the permanent collections of some of the most prestigious museums around the world. One-Two-Three consists of three geometric blocks weighing in at a total of 2,700 pounds and evoking a feeling of ubiquity that the artist felt was best viewed in the presence of nature. Date: March 13-April 10th Where: Exhibited on Bryant Park's Fountain Terrace located at the entrance of 6th Ave and 41st Street. [Photo via]
1 of 7