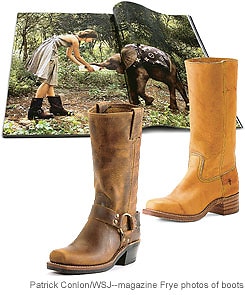 The Wall Street Journal today printed a long detailed article by Christina Binkley about the comeback of the women's Frye Boot style.  (Shown above worn by Keira Knightly in the current issue of Vogue). These well-known boots (you know them even though you may not be aware you do), according to Binkley are "back like a blast from the past, and unlike other flash-in-the pan fashions, their comeback is a telling sign of the times."

"Frye boots' previous heyday was the first time the brand, founded in 1863, became a fashion icon. For women, they represented a new and formerly impossible combination of strength and hipness. Wide-toed and heavy, they were a bold reaction against a period of restrictive femininity: housewives vacuuming in heels. "

"Claudia Goldin hitched herself to a pair of Fryes in the 1970s and stomped around the West Village with her tight jeans tucked into the bootlegs. Now a well-known labor and history economist at Harvard University, she welcomes their return. "Fryes are kick-ass boots," Dr. Goldin says fondly. "They say strength."

We are not sure if a shoe is a sign of the times in regards to the ongoing battle of the sexes and the women's suffrage movement.  Then again, if Manolo Blahniks can help to create the millions of "Carrie Bradshaws" wannabes walking around this planet, anything is possible.  If these boots are going to help to be a catalyst for New York women get over their Manolo-wearing-sex-and-the-city-days we give these "kick ass" boots our full support.