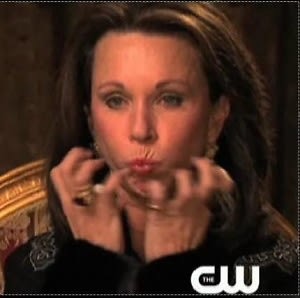 The lowest-rated show on network television was back with a vengeance last night. We saw a Southern Belle in the twilight of her life maybe become an escort! We met some new miserable people.  We watched a miserable person we already knew on a treadmill, spinning her wheels and going nowhere, much like this series.

A lot of this episode concerns journalism, giving the imperiled industry a much-needed shot in the arm. Tinsley is upset about a New York magazine interview with Devorah Rose, in which Devorah, at the behest of CW producers, slammed Tinsley about...you know, I'm not really sure. Something about living in Chelsea (which she doesn't).

Some random lunatic a P.A. pulled from the the Popeye's beneath Tinsley's place gallops into Mortimer's loft and, foaming at the mouth like Uma in Pulp Fiction, calls Debbie a "delusional piece of white trash." No one disagrees, but Tinsley ignores Mamma Dale Mercer's advice to fire back and takes the high road. That is, she more or less disappears for the rest of the episode. 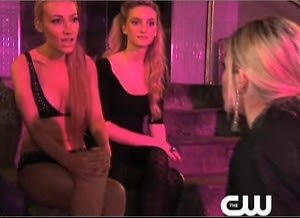 Jules Kirby is also smarting from bad press. So she hits the gym. Her raw anger over the blog and gossip page snubs coupled with the visual of a gay black Jewish man power her through a punishing fitness regimen. She does not fall off any physio balls.

All stretched out and warmed up, Jules takes a decrepit out of control gypsy cab to a middle school pool in Sheepshead Bay. She's there to toast Devorah, who has become the Joseph Merrick-sized face of a fake bikini line that is having a fake fashion show. Jules, doing her best Penelope, claims to own "thousands of bikinis." Maybe on loan from her fictional boutique.

The two get to fighting, of course. At the fake fashion show for the fake swimsuit line, Jules and Devorah blast each others' fake names, fake bodies, fake faces and fake jobs. Jules calls Devorah a man and scurries away. Devorah tracks her down and says "walking away after being so disgustingly rude is classless." Then she throws a Solo cup of Two-Buck Chuck in Jules' face, tucks her angry inch away and screws a janitor.

But the hits k 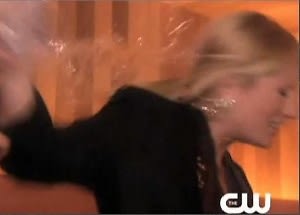 eep on coming for Jules. Next in the ring is Tinsley's little sis' Dabney, the Boo Radley of the Mortimer clan. Things start out phony and pleasant. Then they get to arguing about old incidents none of us have seen on camera or give a damn about, which is kinda the gist of the whole series. This one concerns a fight outside a hotel. Jules denies involvement. She's brought a friend along who looks like an Asian Amanda Bynes. The friend is plastered, flush in full effect. Amanda accuses Dabney of...something. Dabney storms off and, in a desperate attempt to infuse drama into the proceedings, High Society breaks the fourth wall by showing Dabney scream at producers about why she won't go back to Jules and finish reading the script.

Sorry CW, but we all know producers only step in when the punches fly. Which, man, I wish they would on this show.

Elsewhere, Dale Mercer breaks out of her Connecticut nursing home twice to wander down I-95 in a senile daze and clad in nothing but a soiled bathrobe until she reaches Manhattan. First she confronts Devorah about those nasty things Devorah told New York. Dale says Devorah (aka Debbie Trachtenberg) is "common" and "will never be a part of the club" whatever the fuck that club is and that she deserves a "good old-fashioned spanking."

As for the weekly dose of filler: Paul Johnson Calderon and Marble Mouth Tommy resume pretending to be attracted to each other. And "Page 6" alum Paula Froelich (who came off like diamonds despite signing a release to appear on the show) threw a party for gossip folks during which she gave Tinsley advice on dealing with mouth-breathing journalists.

Next week: Paul heads to a party thrown by...oh shit.