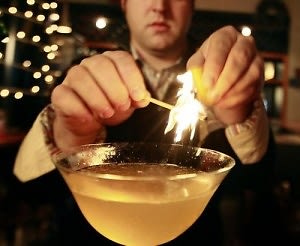 Eater has a post about Apotheke's controversial flaming absinthe shots and the bar's subsequent shuttering. But with Apotheke closed, what other bars participate in the art of flaming cocktails?

Of course, Apotheke used Albert Trummer's flaming absinthe shots as a major selling point to attract clientele, but since the FDNY shut the joint down this summer for this breach in fire code, Apotheke co-owner Heather Tierney has brought a little conflagration of her own: a law suit against Trummer.

Trummer, who was nailed on reckless endangerment, also had flaunted his mixologist skills on "Real Housewives of New York." In light of the ongoing legal imbroglio, you're probably wondering where you can satisfy all your pyro fantasies in the City.. 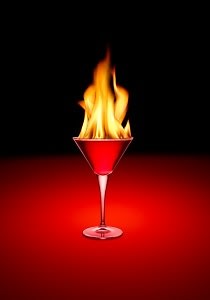 Marco Pierre White over at the Spotted Pig tried to demonstrate a flaming Sambuca to Mario Batali and Tony Bourdain before setting himself on fire as The New York Post reported; on-lookers poured wine and champagne over the barkeep, who got stabbed in the hand during the fiasco. Notorious as that incident may be, you may have to seek other options than that West Village mainstay.

As Grub Street reports former Per Se stirrer Brian Van Flandern, revved up the Carlyle Hotel's Bemelmans Bar with his Flaming Dutchman--an elixir of cognac, sherry, gin, lemon juice, and bitters culminating in a douse of lemon juice sprayed over an open flame. It's a sharp and tangy way to take in the burnt flavor of the flames.

Of course, if you want to tempt fire in a South of the Border, infernal kind of way, there's Death&Co.'s Oaxaca Old-Fashioned, a mix of aged amber tequila, mescal, agave nectar, bitters, and a flaming orange twist.

For your more adventurous side (and anti-Boroughist sensibilities), head to Brooklyn for ignited libations. At Zombie Hut, the Gowanus tiki bar, has an underground following of its flaming shots--some of which allow imbibers to roast mini marshmallows over the glass for a delcious take on the 'smore.