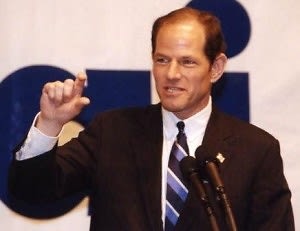 Disgraced ex-governor Eliot Spitzer will co-host a CNN talk show this Fall. The program proves that no slimeball can be judged in the court of public opinion until he's inexplicably wrestled his way into Americans' living rooms via the boob tube. It's too early to tell is CNN's gamble will pay off or prove yet another embarrassment for Spitzer and for the ratings-challenged news network. - Frankly, I can think of several scandal-plagued New Yorkers whose televised comeback bids I'd tune into before the randy love gov's. - Here are a few that are already in the works:

Bernie's Journey: Reviled ponzi schemer Bernie Madoff chats with the public via prison warden-approved Skype sessions to air between Robin Byrd Show repeats on public access television. Madoff will avoid dispensing shady financial advice and instead give crocheting lessons and communicate via morse code with his wife Ruth about where exactly in their old servants' quarters she can find those hidden krugerrands. In a sly riff on the show's title, he will also divulge his personal favorite songs from '80s arena rock band Journey. Just a city boy...

Frown, Jules: Follow Jules Kirby as she infiltrates the United Nations building in hopes of becoming a global youth ambassador and key diversity spokeswoman. Opening credits recall The Mary Tyler Moore Show as Jules juantily tosses her beret into the Manhattan sky. Recoil in horror as our heroine mistakes Ban Ki-moon for the Grand Sichuan delivery guy and asks the Nigerian delegation why it's taking them so long to mop the General Assembly floor.

Mad About Michael!: Fresh out of jail, Michael Alig allows the cameras to film his reentry into mainstream society as a reformed party boy and murderer. Alig will mentor and speak with inner-city youths about the dangers of candy flipping. He'll shop for dowdy women's business suits at the Limelight Marketplace and enjoy quiet, civilized nights out on the town at Lincoln Center chamber music concerts.

Hoochitel: Famed first mistress of Tiger Woods, Rachel Uchitel will strive for non-tabloid legitimacy on this hard-hitting PBS docudrama. Watch Rachel as she reigns in her promiscuous ways, volunteers at the local free clinic and puts on her thinking cap to rewrite our deeply flawed tax code. The scuttlebutt is that none other than Elin Nordegren makes an appearance just in time for November sweeps.

How did all of these series get the greenlit? Next thing you know, Ashley Dupre will have a New York Post byline.