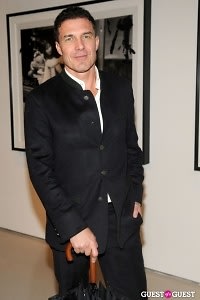 In the newest emergence from The Chelsea Hotel rumor-mill, Andre Balazs is thought to have his gaze set on buying the storied establishment. What's at stake for the prominent hotelier and his dream-hotel creations?

There is something surreal about the hotels Balazs feasts his eyes on--more mythical or cinematic than fixed in the everyday. Just consider the larger-than-life aura The Standard holds in New York these days.

But also take, for instance,  his West Hollywood Chateau Marmont, which he transformed from an L.A. rock mainstay to a go-to spot for movie stars since he bought it in 1990. The hotel, with many a celebrity guest jewel in its crown, has been immortalized in Sofia Coppola's recently-released " Somewhere." At the film's premiere, Coppola discussed the Chateau as a character in and of itself within her oeuvre.

The New York Post reports that Balazs was seen poking around the 250-room property on Wednesday before going through meetings with the management followed by a pit stop at the Chelsea Room.

The narrative reckoning potential in that deal is ripe with depth.

Balazs had a tangential association with the Chelsea when Richard Born and Ira Drukier, former associates of his, took over management when longtime manager Stanley Bard was slapped with a pink slip. During that major upheaval, the hotel was spangled with signs and banners of protest.

The Chelsea has an aura of a New York gone-by where Janis Joplin and Patti Smith were regulars, where Andy Warhol and Arthur Miller dreamed up masterpieces (you might try showing up to El Quijote dressed as one of the legends). Heck, in Just Kids, Patti Smith reports having stayed there for $55 a week.

Would this fabled backdrop-if he really is interested in the Chelsea--be an impediment to the hotelier's new incarnation of the venue or another opportunity for expert reinvention?