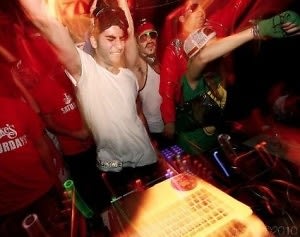 Jacomino is known for his raging mixes of Hip Hop and Rap to House and Electro music that makes fans and party goers' hearts beat. Since moving to New York City from Italy, Jacomino is on his way of acquiring a name for himself among the greatest DJs in the New York City scene, and spinning at the hottest clubs. Some of his venues include 1OAK, Green House, Pink, and LIV in Miami. And has recently started touring in different cities around the world such as Barcelona and Acapulco. He has also worked with other respected DJs, like JusSke, Steve Aoki, Cassidy, and Clinton Sparks - and has also collaborated with other artists such as Jay-Z, Kid Cudi, Lloyd Banks, Jim Jones, Ron Browz, Talib Wali, Chelly, and many more. [Picture via]
1 of 10