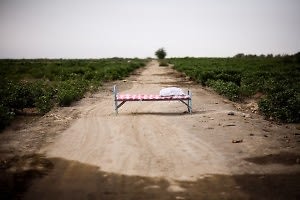 10. Lisa Ross: After Night Asya Geisberg Gallery is pleased to present After Night, an exhibition of photographs by New York based artist Lisa Ross. For ten years, Lisa Ross has documented the ritual objects and burial sites of the Uyghurs of Western China. In her enigmatic new series After Night, she has revisited Xinjiang, and captured another aftermath — the commonplace ritual of sleep. Details: Asya Geisberg Gallery 537B West 23rd Street New York, NY October 27 - December 17, 2011 Opening: Thursday, October 27, 6 - 8 PM [More info]
10 of 18