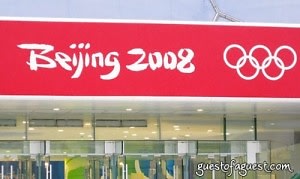 GO HERE for a few more photos from Beijing.

Ni Hao, or hello, from the 2008 Olympics! I've been in Beijing to follow the quest for gold on the rowing course, especially that of your favorite men's pair (I can honestly say I've known them all their lives), which has gone exceptionally well so far (see them row in the finals on Saturday). I'm staying in the Shunyi area, which is also where the rowing/canoeing/kayak venue is.  One of the "outer boroughs" of Beijing, it's much less crowded than the city, but it can take over an hour to get to the Olympic Park venues and the heart of the city.

After a day of recovery (the 14 hour flight is a killer), my first day venturing into the city was a bit disappointing.  Despite the government's best efforts to reduce pollution, and even a bit of weather control, on that first day, and on most since, the city has been wrapped in a gray haze of humidity and smog.  Which is unfortunate, because it really does obscure the city's good points.  I had no idea how green much of Beijing really is - a profusion of parks of all sizes and tree-lined boulevards dominate the center city.  It's also one of the cleanest cities, in many ways, I've ever been in - despite the haze in the air, I didn't see the grime we see so often back in NYC.  I can't think of a single piece of garbage I've seen in the streets or on the sidewalks (back alleyways, well, there's only so much that can be done).  Most corners sport twin trash receptacles, one for recyclables, one for non- (which I've seen throughout my time here, in and out of Beijing.

Things picked up when I got together with a friend of a friend and some other ex-pats who live here in Beijing. They took me out to the popular restaurant row on the Dongzhimennei Dajie, or Dongzhimen Inner Road.  In the space of three or four city blocks, there must have been almost 150 restaurants of differing specialities (we settled on a skewer place).  After dinner, we headed over the the Chaoyan Park neighborhood.  During the day, the park is hosting the Olympic beach volleyball, and at night the area is one of the hottest for Beijing nightlife.  The place to be that night was The Beach, a huge rooftop terrace bar that is part of the Block 8 restaurant complex.  After a few too many Tsingtaos, I headed back to the 'burbs with a great start to my Olympic experience.

Jason Read Gives Us The Scoop From Beijing