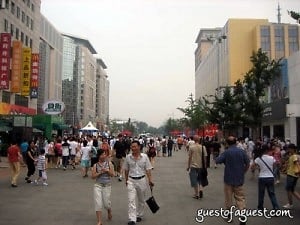 Having gotten my feet wet (literally) walking around Beijing, my group decided that we would use our last completely free day before the rowing competition kicked off to get an early head start on all of the gifts we would need to bring back (and of course a few things for ourselves).  In Beijing, the first stops on that journey are the Silk Market and The Hongqiao Pearl Market.  Though you can get pearls and silk at both (custom jewelry and tailoring too), there is much, much more to be found.  These markets have evolved from public squares to multi-story edifices of commerce.

More photos and story below

The Silk Street Market is a baptism of fire in the hard-sell.  Hundreds of individual stalls line most floors, hawking fakes (good fakes though) of the big brand names, silk scarves, souvenir goods, and the like - the very, very enthusiastic sales force might take your arm off, pulling you from side to side into their stalls to give you "the best price! just for you!"  Just memorize the phrase "Boo Yao" (No Thank You) and repeat as necessary.  The Hongqiao Market has a similar setup, but at least on the day I was there, a lower key approach.

With commercial hunger only partially sated, we moved on to the city's famous shopping street of Wangfujing. We needed to answer physical hunger too, so we sampled the food stalls of Wangfujing Xiaochi Jie (Small Eats Street), which is just opens off of Wangfujing. The majority of food here is skewers of lamb, chicken, beef, and vegetables, but they also had on offer chicken hearts, scorpions, crickets, and some sort of larvae (I did not have the larvae). There are a few sit down stalls with dumpling and steamed buns too.

Wangfujing Street is kind of Beijing's Madison Avenue, with all the best Western and Chinese brands available.  Now a pedestrian mall linking three or four large malls and department stores, with smaller stores scattered in between, it has been a commercial area since the Ming Dynasty (1368 to 1644).  The Wuyutai Tea Company, for example, has antecedents back to the 1600s.  During the Olympics, there are multiple large outdoor TV screens along the street for people to watch the Games all day and into the night.

As it quickly became clear that just because most of the goods were made in China didn't make them cheaper than the U.S., I took advantage of the big screens to watch some soccer preliminaries, then visited

the excellent Foreign Language Bookstore to pick up some reading material for the long bus rides and queues I expect for the Games and the side trips we hope to take around Beijing.  For dinner that night, we were lucky we had only a few blocks to walk over, to Huan Ting at the Penninsula Hotel, where the highlight of the meal had to be the Peking duck, finished table-side.