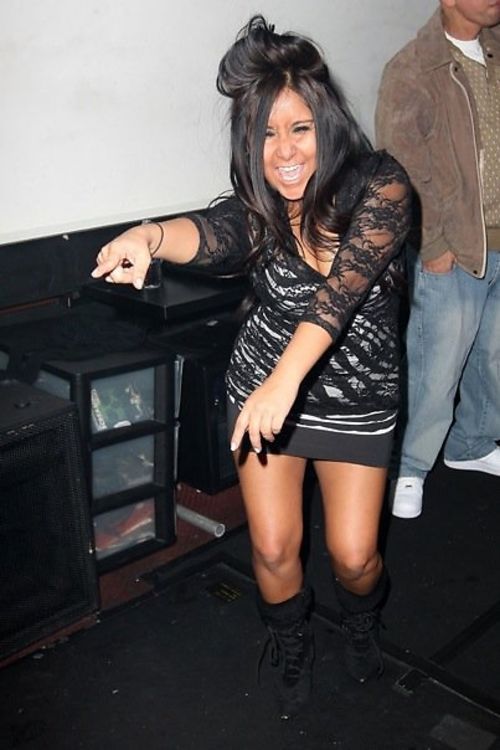 Nicole Polizzi (aka "Snooki") is an American reality television personality starring on MTV's "The Jersey Shore." She lives in upstate in New York and is studying at a local community college to be a veterinary technician.

Polizzi was born on November 23, 1987 in Poughkeepsie, NY. She is of Chilean descent but was raised by an Italian adoptive family, allowing her to identify with her Italian costars and the Italian-centric culture on "The Jersey Shore."

Polizzi's nickname ("Snooki") derives from a reference to the film "Save The Last Dance," wherein a DJ is nicknamed "Snooki the Cootchie Crook." The nickname was created by Polizzi's girlhood friends and has stuck with her since eighth grade.

"The Jersey Shore" premeired in December of 2009 and features a group of young men and women from the New Jersey area living together in a shore house for the summer. Other residents during Season 1 (Snooki's inaugural season) included Angelina "Jolie" Pivarnick, Jenni "JWoww" Farley, Michael "The Situation" Sorrentino, Paul "DJ Pauly D" DelVecchio, Ronnie Ortiz-Magro, Sammi "Sweetheart" Giancola and Vinny Guadagnino. Giancola is the only house resident on the show confirmed to be from New Jersey.

"The Jersey Shore" has come under much criticism for its representation of Italians (referred to as "guidos" and "guidettes" on the show), New Jersey residents and especially the Jersey Shore as an area. Snooki's role on the show became more pronounced when she developed a strong friendship with Jenni "J-Woww" Farley, and she became arguably the most famous "character" on the show after she was punched in the face during a bar fight in the fourth episode. Snooki and her fellow castmates have come under increasing scrutiny as they continue to fall into fights and violent encounters both on and off the show.

Snooki and her "Jersey Shore" co-stars have parleyed their reality television fame into appearances at universities, bars, other venues and on other television shows. Season 2 of "The Jersey Shore" is scheduled to premiere on July 29, 2010.