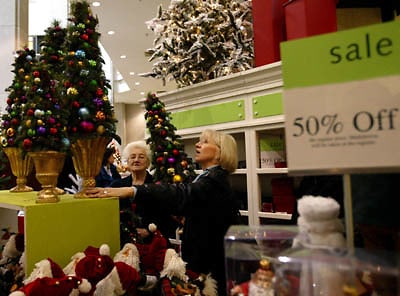 “You know not to talk to mummy when she is sales shopping."  Heard by the Post at Sak's Fifth Avenue store the day after Christmas, and undoubtedly all across the world, as after-christmas sales are set to be at record high numbers this year to make up for one of the worst retail seasons seen since 2002.  "Black Friday" aka the day after Thanksgiving has routinely been know for the time of year when millions of Americans crowd stores all across the country to snag up post-Thanksgiving day deals.  This year, it will be the post-Christmas sale-shopping frenzy that will be remembered, at least that's what many retail analyst and store owners are hoping for.  Maybe we are just FINALLY catching on to the tradition that much of the world has for years celebrated: Boxing Day.  Especially celebrated by our British, Australian, and Canadian neighbors, Boxing day is a public holiday and is the biggest sales period of their retail cycle.  Here, it is common to see mark downs up to 75% on Christmas supplies, as stores are eager to get rid of the now-irrelevant "junk", but now you can expect to see those kinds of MAJOR markdowns on the relevant stuff too, like 19-year-old Jessica Goodman did when she went to Saks and scored a $1,380 pair of crocodile-leather Giuseppe Zanotti high heels for $150 (not so junky).  So, while you are going in to stock up on your Christmas wrapping paper supply for next year, plan on browsing for deals on whatever Santa forgot to leave you under the tree.