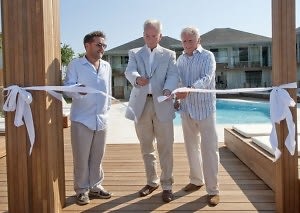 Thursday evening The Montauk Beach House hosted a ribbon-cutting ceremony, extending an invitation to the public to take a peek at the newest hotel in the heart of Montauk town. A pure white bow was chopped by co-owners Chris Jones and Larry Siedlick, marking the beginning of business. East Hampton Town Supervisor William J Wilkinson was also on hand to help out with the scissors, and the celebrating.

In a design collab with hotel visionary Chris Jones and creative director Walt Lindveld, the luxurious hotel represents a marriage between a classic and modern version of Montauk. Not just a place to stay the night, Jones notes "we're also an elegant way to spend the day." And with their super exclusive beach club, we could see how that would be so.

The Montauk Beach House plans to retrace the steps of the Ronjo hotel, the previous hotel that occupied the same spot. In the 1960s the Ronjo was recognized as an iconic luxury hotel, complete with a namesake Tiki god, and although that luxury hotel eventually became a rundown motel, we have much higher hopes for TMBH. One relic does stand from the past hotel, and that is the Tiki god, who has also had some work done and is now a vision in bronze. 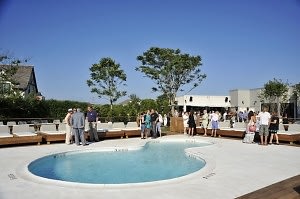 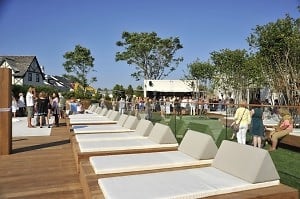 Most visitors on Thursday were pleasantly surprised by the luxurious quality of the resort. The Montauk Beach House has less of a hipster feel than the big name spots in Montauk, instead giving off some Hamptonized vibes, with exposed beams, washed out wood and kitschy details that include claw foot bathtubs. They do however pay attention to the little amenities, and offer quarters complete with vintage designer furniture as well as interconnecting rooms and bunks for the "mini-hipsters" in your life. 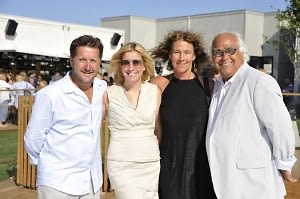 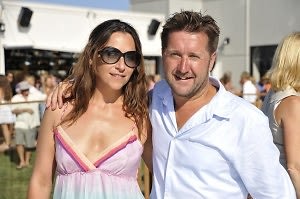