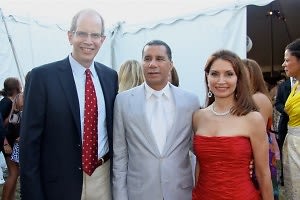 The dinner (provided by Robbins Wolfe Eventeurs) and dancing (to the tunes of the Alex Donner Orchestra) took place under elaborate tents on Wickapogue Road, designed by Tony Urratia. In addition to Patterson and his wife, event chair Jean Shafiroff, Chuck Scarborough and Jenny Paulson - who dedicated a $5 million gift to the hospital in the memory of her late father - were also in attendance. The donations and proceeds from the event will benefit the Jenny and John Paulson Emergency Department, the creation of which will almost double the size of the hospital's existing ER center.

It's been a good year for the hospital, even before the successful event. The hospital received its second Healthgrades Patient Safety Excellence Award this year, as well as garned a Pinnacle Award for Quality and Patient Safety.