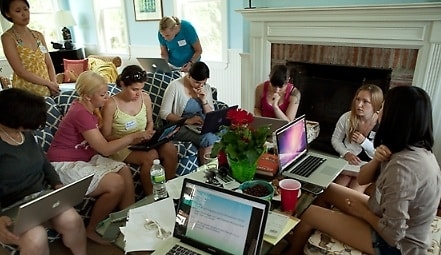 When you hear of a hackathon, it is hard not let image of a group of  guys, piles of pizza boxes, beer and redbull cans scattered about a dark dorm room flash in your brain (thanks Social Network). Which is only part of the reason the Hamptons Hackathon for Humanity was so awesome... Along with Deborah Jackson's JumpThru, Sara Chipps and Vanessa Hurst's Girl Develop It teamed up to,

"To redefine the term hackathon to making a difference in the under-recognized tragedy of human trafficking in the United States and in the world." [via]

Girl Develop It started last summer and set out to teach programming classes in languages such as HTML, CSS, Javascript, JQuery, and PHP to women. The classes that are offered usually get sold out within 24 hours on Meetup, and today they have taught over 500 women to code. Badass!

Over the weekend, the girls kept the good work going with the three day Hamptons Hackathon for Humanity. Last Friday night, on a Southampton estate, 16 women posted up to begin the three day hackathon. If you thought they were slugging back bug lights, red bull and chinese food, you are wrong --they spent the weekend banging out codes, just as intensely as the brainy college students, with a little more flair.

Silicon Valley Bank and Gunderson Dettmer, a New York City law firm, sponsored a series of gourmet meals for the hackers. As bottles of Chardonnay chilled in the garage refrigerator, guests were treated to Mexican corn salad, grass-fed steak, and striped bass filleted on an outdoor grill. [via] 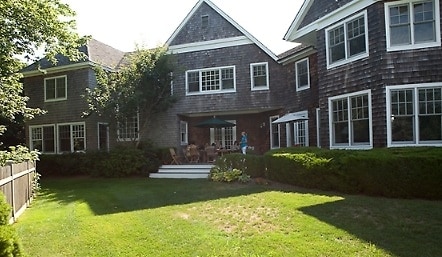 But just because they did their hackathon in style does not mean that they did not get the job done. In fact, by the end of the weekend the hackers had created an interactive game to educate on human trafficking in the United States. Girl power, good cause and doing it all in style... great job girls!