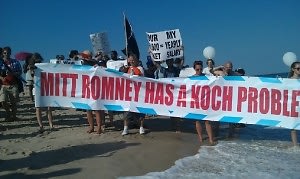 An army of 200 outfitted in flip flops and shorts arrived at David Koch's beach-front estate Saturday afternoon to amp up the excitement at presidential candidate Mitt Romey's $50,000 a plate fundraiser. This most beachy of all protests could only take place in Southampton under these circumstances. The protest was organized under the umbrella of Long Island Progressive Coalition, and groups such as Occupy Wall Street, MoveOn, Occupy the Hamptons, Strong Economy for All Coalition, Occupy the East End, Greenpeace, NY Communities for Change, Art Not War, among countless others, all showed up to protest all that the presidential candidate stands for.

All with the intention to cause a scene, the protestors marched towards David Koch's house on Meadow Lane, providing fundraiser attendees with a not-so-warm welcome to their expensive afternoon. A plane with a banner that read "Mitt Romeny Has a Koch Problem" occupied the airspace, corresponding with the protestors cries. 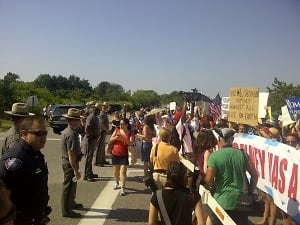 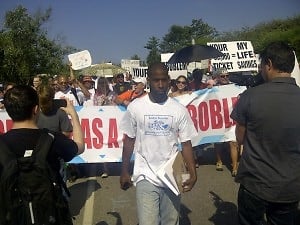 Protesting for a number of reasons, the group garnered tons of attention, attracting numerous news sources and of course the cops. The demonstration were greeted with a police line, preventing them from causing too much of a ruckus, and allowing the ridiculously priced fundraiser to carry on as planned.