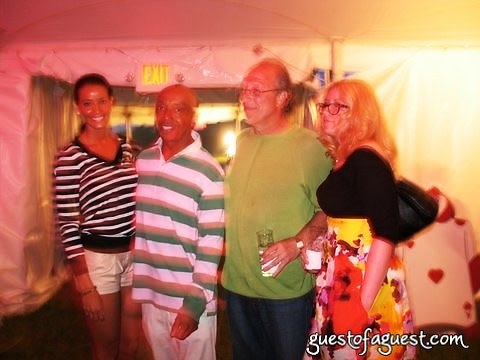 Go HERE for more photos of this event by Justin Blake Shaffer.

On Saturday night, about 1,000 fun and festive people gathered under the large tents at Luna Farm in Sagaponack for the Annual Love Heals benefit – one of the most fun and breezy events of the Hamptons summer season. This year's theme was “Adventures in Wonderland,” and Alices and Queens of Hearts enjoyed finger lickin’ good bbq eats, Tasti D’Lite, Imperia Vodka cocktails and brews from Brooklyn Brewery. The money raised funds the programs that Love Heals creates.

As we danced to the home spun tunes of DJ Ruckus I couldn't help but think of Alison Gertz, the young Manhattanite who died of AIDS in 1992, and the inspiration and driving force behind this amazing organization. Alison doesn’t get to dance on that dance floor at Luna Farm with us, but it is clear that her spirit is carried on through love. Without her efforts, her story, and her bravery – none of us would have been brought together under those tents. Without love and support from so many people, this event could not have taken place. It’s a true sign that a difference is being made. The message seemed clear: Have fun, enjoy life, and play safe.

There are probably a lot of people that can identify with having slept with someone and not used protection. When I went to college I felt like a lot of my female friends were on “the pill” and were sexually active, and often had sex without condoms. While they were protected from getting pregnant, they were not protected from HIV or other STD’s. There was something of a laissez-faire attitude among my friends; getting HIV was something that perhaps happens to ‘other people.’ HIV has often been termed the “gay” disease because of the predominance of gay men who have become infected.

It is also a large issue for the non-white population in the US and 3rd world countries. For certain people, the prospect of becoming HIV positive seems so far away from home. In the early 1980’s, the prospect of becoming HIV positive if you were a white woman probably seemed even further from reality. So in 1988 when Alison Gertz, a wealthy 22 year-old Manhattanite, was diagnosed with AIDS, it was a shock. Alison later leaned that she'd contracted the disease from her first sexual encounter in 1982. What was a bigger shock is that Alison shared her story and made it public, helping to educate and change perceptions on the face of AIDS. She broke the stereotypes and changed perspectives. She was living proof that contracting the disease can happen to ANYONE. In the four years after her diagnosis, she bravely shared her story with so many, in hopes that women and men would take action to protect themselves. Although the world lost Alison in 1992, her message is still carried forward today through Love Heals, the Alison Gertz Foundation for AIDS Education, founded in 1992. “Love Heals empowers young people in the fight against HIV. Since 1992, our HIV-positive speakers and health educators have reached more than 340,000 young people, parents and educators with our lifesaving message.”

Love Heals is really a legacy of love started by Alison’s three best friends Stefani Greenfield, Victoria Leacock Hoffman and Dini von Mueffling. For the last 15 years, 50,000 young people annually are given the message of safer sex practices through speakers' bureaus, educational videos and lesson guides. The organization has made a footprint and continues to grow as its message of love, hope and safety in sexual practices spreads.