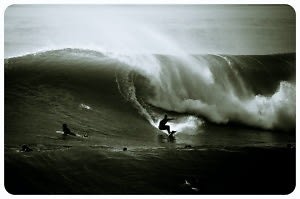 [Photo via tcolla] Surf Lodge is capping off their outdoor Surf Cinema series Sunday night with an oldie, but a definite goodie. This weekend's film was released in 2002, but still considered by some to be one of the best of its' kind. September Sessions is a documentary created by surfer/musician Jack Johnson who followed a group of pro surfers with a camera surfing the waves of the Sumatra Islands. Sure you can watch this flick at home, but why do that when you can catch surfing legends on the outdoor big screen while lounging in the sand by the water in Montauk.

With a soundtrack including G Love, Ozomatli, Greyboy, and of course Jack Johnson, the film captures Kelly Slater, Brad Gerlach, Ross Williams, Rob Machado, Shane Dorian, and Luke Egan on an adventure during their time away from competitions in late September of 2009 on a surfing excursion luckily caught on tape. Don't miss the Surf Lodge screening at 9pm this Sunday night.