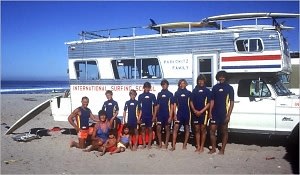 Surfing enthusiasts and documentary fans alike should head over to the Parrish Art Museum tonight for a screening of Doug Pray's Surfwise, which tells the tale of the once famous Paskowitz clan. Dr. Dorian Paskowitz has been preaching the gospel of "clean living, clean surfing" since the 60's, when he ditched his medical practice in Hawaii for the wild waves. What sets Paskowitz apart from your typical surf bum is that he brought his wife and what would grow to be nine kids along for the ride, living in a succession of a 24 foot camper he parked along the shores of southern California.

When they weren't surfing, the Paskowitz children were homeschooled, subjected to a stringent, all-organic diet, and parented in the same way Dr. Paskowitz observed zoo animals were. While this utopia is fascinating enough, it's watching it dismantle that's truly gripping, not to mention sad. Apparently life's only a beach if you're on one. Catch the flick, plus live music by Sound Wave, tonight at 7. Tickets are $10 at the door.