Go HERE for more photos by Gabrielle Bluestone and tag yourself and your friends!

Armstrong, who flew in from LA for the opening weekend of the nine-bedroom gated party house in Noyac, left the next morning to spend the fourth with her daughter, but she made the most of her night, dancing with Dina Lohan (who kept her blackout shades on the whole time) and dining at Georgica with Morgan later that night.

"What I do like about the Hamptons is you can get on that Long Island Distress-way last minute with no plans and end up entertaining your friends from Hollywood," Morgan said.

Rev Run jumped up to the DJ booth for an impromptu set, emceeing as DJ Ruckus and Jesse Marco provided the tunes.

Also in attendance at the OK Magazine-sponsored party was Twilight's Kellan Lutz, who immediately stripped off his shirt (thank you!) to show off his athleticism, rallying on the house's tennis court before starting a volleyball game in the pool. Georgica's executive chef Seth Levine got soaked, but Kellan's crew (including manager Ryan Daly) stayed dry in the sand on the NY Lounge Decor daybeds. 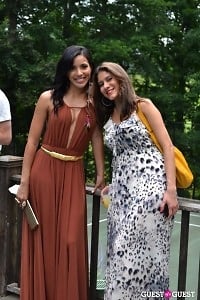 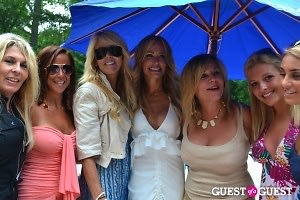