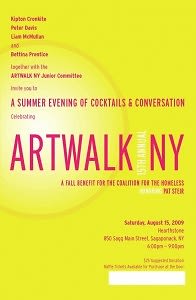 Summer Evening Celebrating ArtWalk NY Where: Private Estate in Sagaponack (map) Why: Join Kipton Cronkite, Peter Davis, Liam McMullan, Bettina Prentice together with the ArtWalk Junior Committee for a summer evening of cocktails and conversation celebrating the 15th Annual ArtWalk NY, a fall benefit for the Coalition for the Homeless honoring Pat Steir. Invite Only. When: Saturday, 6pm - 9pm

Check below for our top picks of where you should be this weekend between trips to the beach and poolside lounging, of course. Don't forget to check our calendar for a full list of parties, soirees, concerts, galas, and events to keep you busy during your weekend in the Hamptons...

Summer Gala With Preview Of 'The Art Of Fashion In The Hamptons' Exhibition Where: Guild Hall: 158 Main Street, East Hampton (map) Why: Check out the work of nine of the world’s most influential fashion designers with ties to eastern Long Island: Tory Burch, Betsey Johnson, Donna Karan, Calvin Klein, Reed Krakoff, Ralph Lauren, Nicole Miller, Elie Tahari, and Vera Wang. Dining alfresco under a tent on the property of Tony Ingrao and Randy Kemper, with live auction and dancing. Invite Only. When: Friday, 6pm - 10pm

Carolina Herrera New York hosts VIP Sneak Screening of MY ONE AND ONLY Where: Goose Creek: 30 Wainscott Stone Road, East Hampton (map) Why: CAROLINA HERRERA NEW YORK cordially invites you to join Renée Zellweger at a private VIP sneak screening of Herrick Entertainment’s My One and Only starring Renée Zellweger, Logan Lerman, Kevin Bacon directed by Richard Loncraine. Followed by dinner at the Blue Parrot. Invite Only. When: Saturday, 7pm - 11pm

Alexa Ray Joel performs at Stephen Talkhouse Where: Stephen Talkhouse: 161 Main St,. Amagansett Why: The daughter of Billy Joel and Christie Brinkley has been performing all over the East End and now she's on her way to take on the stage at Talkhouse this weekend. When: Friday: 7pm - 9pm -------

Big Suga Barge Bash Where: Peconic Bay- Southold by Founders Landing/Goose Creek Bridge Peconic Bay- Southold by Founders Landing/Goose Creek Bridge (map) Why: Come by boat, raft or kayak. If you don't have one then - strap on your rock 'n roll swimmies. This is gonna be one great Rock 'n Roll raft up! Big Suga, Jon DiVello and Big River Ransom and other musical guests will be performing live from a barge in the Peconic Bay. In the shallows between the mouth of Town Creek "Founders Landing" and Goose Creek Bridge (Southold). To be exact - plug these coordinates into your GPS! N41 03.48 W 72 24.65. You can launch your watercraft of choice from several different beaches in the area. You can also wade out to the show if you know your way around, (ask any local kid). When: Saturday, 2pm - 5pm

The Animal Rescue Fund of the Hamptons Beach Ball Event Where: Bridgehampton Tennis and Surf Club: 231 Mid Ocean Drive (off Ocean Road) (map) Why: An evening of dinner and dancing on the beach in support of ARF's valiant cats and dogs. Cocktails and raw bar at 6:30 with dinner at 7:30pm. Invite Only. When: Saturday, 6:30pm - 10pm