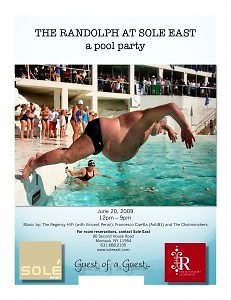 The Randolph at Sole East Pool Party with GuestofaGuest Where: Sole East: 90 Second House Road, Montauk Why: Because GofG is co-hosting! Um...that is reason enough. Further explanation is absolutely not needed. When: Saturday, 12pm-9pm

Making plans for your weekend in the Hamptons? We've got you covered. Click below to see where we'll be this weekend. Warning: This just might be the busiest one yet with grand openings, b-day bashes, pool parties, concerts, fashion shows, film screenings, celebrity DJs, galas, and benefits you wont want to miss...

10th Annual Love Heals Event Where: *CHANGE OF VENUE* The Polish Hall: 230 Elm Street Southampton Why: Because love heals...even in the rain. Due to weather, the event will be held at Polish Hall instead of the beautiful Luna Farms (tear). This is still one of the "must go-to" events of the summer with this years confirmed guests including Russell Simmons, Ivanka Trump, Kelly Bensimon, and many, many more including this years host Charlotte Ronson. After party? Saturday, 7:30pm-11pm

13th Annual Heart Of The Hamptons Ball Where: Hayground School, Bridgehampton Why: A VIP reception, cocktail hour, live and silent auction, dinner and dancing all in support of the American Heart Association. Getting dressed up and bedazzled for a cause during this elegant Gala is all one needs for an exquisite evening in the Hamptons. When: Saturday, 6pm-11pm

EcoFabulous in the East End Benefit Where: Wölffer Estate Vineyard: 183 Sagg Road, Sagaponack Why: Because going Eco and being Fabulous go hand in hand, You wont want to miss the East End's first-ever completely "green" benefit complete with a "farm-to-table-dinner" from local farms and prepared by award-winning local chefs....AND we heard Stavros Niarchos is included in the list of confirmed guests. When: Saturday, 6:30pm-11pm

Social Life Magazine's June Issue Party Where: Social Life Estate, Watermill Why: Cover girl Jessica Hart hosts the evening along with Justin Mitchell and Devorah Rose. The evening will also feature an haute jewelry trunk show, and the after party will be held at Axe Lounge/Dune Nightclub. When: Saturday, 7pm-10pm

Mishka Performs at Surf Lodge Where: Surf Lodge: 183 Edgemere Street, Montauk Why: Because he was the first artist signed to Matthew McConaughey’s J/K Livin' Records label so your in for a chill night of "Bob Marley meets Finley Quaye meets Neil Young meets Sublime meets John Butler meets Joni Mitchel" Mishka topped charts in Britain and Japan after spending his early life living on a boat in the Carribean and now he's headed for Surf Lodge. Go. Check. Him. Out. When: Saturday, 6pm

The Windmill Movie" Special Hamptons Screening Where: Sag Harbor Theater: 90 Mains Street, Sag Harbor Why: Because the majority of this Alexander Olch-directed documentary filmed by Richard P. Rogers over the course of 20 years was shot right here in the Hamptons. The highly acclaimed film is showing is holding a special screening tonight and we can't think of a better way to spend your Friday evening and if you have time during your busy Saturday night, Olch will be on hand for Q & A When: Friday & Saturday, 8pm-10pm

Love Heals at Luna Farm Event at LILYPOND Where: Lily Pond: 44 Three Mile Harbor Road, East Hampton Why: It's a busy night for our friends over at Lily Pond with Charlotte Ronson and her Love Heals after-party taking place directly following Alexa Winner's fashion show. Head to the East Hampton hot spot for not just one party, but two! When: 11pm

6th Annual Club Starlight Benefit Where: Ross School, East Hampton Why: This year's event emceed by Jay McInerney, will honor Martha Stewart with special guests Seth Meyers from SNL, recording legend James Ingram, and a performance by Alexa Ray Joel all in support of the Ross School Programs and Scholarships. When: Saturday 6:30pm

DJ Aoki at AXE Lounge Where: AXE Lounge at Dune: 1181 North Sea Road, Southampton Why: You've all heard of and surely seen Aoki and friends all over Cobrasnake and now he's bringing the West Coast debauchery to the East End. When: Saturday, 11pm

Steven Ekerovich B-Day Bash at Day & Night! Where: 281 County Rd-39A, Southampton Why: He has shot every birthday celebration that has come though the doors of D&N and Pink and now SBE is throwing a b-day party of his own all day and all night right in the middle of their Grand Opening celebration followed by a bash at Pink Elephant. You know you want to stop by and wish the awesome photog a very happy birthday! When: Saturday, D&N: 2 - 7pm, Pink Elephant: 12am til the b-day boy can drink no more.

30th Annual Shelter Island 10K Run and 5K Walk Where: Shelter Island Why: We know most of you don't weekend in the Hamptons to go on 6 mile runs, but if you happen to be on Shelter Island and come across 1,000 runners, look for our very own Kristin Luciano! She'll be the only one in a sequins and glittered running gear. When: Saturday 5pm-9pm

And don't forget about Sunday...

Locos Only Sunday Brunch @ the Surf Lodge Why: Because it's Surf Lodge! "Rain or Shine....This sunday, mend your weekend hangover with a chill relaxing day at Surf Lodge... Enjoy a tasty brunch, delicious drinks, and rockin tunes by Dj Francesco Civetta of Anti 81... with special musical guests through out the day...." When: 11:30am - 7:30pm