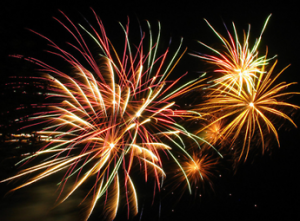 Saturday night Sag Harbor and the North Sea Fire Department kicked off the week of Fourth of July celebrations with firework shows that stunned and captivated bystanders. There's really no better way to celebrate the independence of our country than covering your ears to muffle the sound of the sky being lit up with every color of the rainbow. We're here to help you organize your fireworks schedule for the summer, which ends around the 1st of September. Attending one of the public shows, or catching a peek of a private one is much safer than setting off your own array of illegal rockets you picked up in Virginia. So pack a picnic, of alcoholic beverages, grab a blanket and don't forget your sweater, it's fireworks time!

2. American Picnic with Fireworks By Grucci, another private show to benefit the Southampton Fresh Air Home. The public can catch the 'works by Shinnecock Bay on July 6th @ 7 PM. Phone: (631) 283-5847