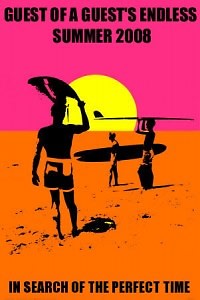 An Open Letter From Rachelle Hruska - Editor Guest of a Guest

Like all good things, the summer of 2008, as much as I would like it to be, can not be endless and must inevitably fade. Consistent with my good-willed wishes, temperatures have been hanging out in "Indian Summer" territory, but I'm afraid that too will soon pass.  This weekend, after the Oyster Bay "Oyster Fest" and the Hampton's International Film Festival, it will finally be time say goodbye to all things summer, and all things Hamptons.  So, it's also time for us here at Guest of a Guest to officially say adios to summer, but on the way out we thought we'd share some of our fondest memories with you that will hopefully help us through those cold winter days until next season.

First off, the launch of the Hamptons blog was a big step for us as a company.  I enlisted the help of Claire Willett, an NYU undergrad, to accompany me on my adventure out East which proved to be one of the most enjoyable experiences of my life.  Yes, at times it was hectic, running back and forth between the city and the Hamptons, (god knows I've logged in my time on the Jitney), but at the end of the day we created a sister blog that I am very proud of and which I believe had wonderful content.  And so, without further ado, my homage to Summer '08:

From Quogue to Montauk, Shelter Island to East Hampton, and everywhere in between....here are some of my favorite memories from this summer (tear):

Surf Lodge: What can I say? This year was the summer of Surf Lodge.  Sam Talbot's crew kept us coming back for more and more....and more.  We ate, drank, danced, and paddleboarded our way around this little Montauk gem that gave us the best music (Moby, Rhett Miller, Julian Marley, White Buffalo, etc), the brightest pictures, the coolest parties, the hottest servers, top notch rooms, Vanity Fair worthy cuisine, and a consistent spot for a perfect summer sunrise. I know the locals at the end of the day secretly hope the place is on repeat next year.

Nightlife: It was a tag team summer last year, and this year, the theme continued with Pink Elephant at the Capri, Dune, La Playa, and Lilypond all vying for your affection...and your dollars!  Dune's $2k minimum for a table on Memorial Day weekend was the whole start of our "Best $2k I Ever Spent!" columns that we continue to this day on our main site.   The clubs were stacked with the best promoters from the city, and brought in names like Leo DiCaprio, Chase Crawford, Whitney Port and Lindsay Lohan just to name a few.  Though not a clubby person myself, I did manage to make it out once or twice.

Parties, Polo and More: At first it was confusing, Claire and I being green to the Hampton party circuit, to keep up with all of the events.  What's the difference, we would ponder, between a "soiree", a "benefit", a "fundraiser", a "gala" and a "bash"? I'm not sure if I quite have it all figured out yet, but along the way some of our favorites were the Tahari's "God's Love We Deliver", The Roaring 20's Gala in Quogue, SCOPE Hamptons, ACRIA at Steve Klein's, Darfur, those crazy Real Housewives parties, Rick's Crabby Cafe 4th of July party in Montauk, and Luigi Tadini's Un-Birthday Party, the estate parties (The EMM Group Estate (TENJUNE), Grey Goose Manor, Socialife estate and those crazy crazy Aussie parties), and of course, Robert Wilson's Watermill Center. Besides our routine bonfires on the beach, these were just a small taste of the parties that kept us busy, and social. Our favorite Hampton socials became: Russell Simmons, Christie Brinkley, Katie Lee Joel, and Kelly Killoren Bensimon.  There were also clam bakes, Jonas Brothers, bbqs, Tanteo and shopping sprees, AND OH THE POLO!!!!!

Planes, Trains, Automobiles and...Jitneys: We got a lot of sh*t for the Range Rover we were bebopping around in all summer, but alas, we researched every possible way to get out east.  From my favorite, the Jitney (free wifi), to the Luxury Liner, the Long Island Railroad (LIRR), the Cannonball Express to the VH1 Jets, nothing was off limits.  We also made sure to document all of the rides once we got out there in our "Car of the Day" feature.

Hamptons Fashion: Clothes made the men, women, children, and couples this summer as we were constantly on the look out for the best dressed.  Tracy Feith was the new Vilbriquin in town, fedoras were back in fashion, and I debuted the "fly fishing lure belt".  We jammed around in our jorts, digged Kenny Scharf's surfboard, played at Lisa Perry's, and visited the real Izzy Gold at Blue and Cream.  All while keeping an eye on the best swimwear options.

Hampton Grub: Home of the priciest eggs we've ever had, Hamptons Coffee was our go-to for all things coffee, mainly for it's convenience, ditto for the Golden Pear.  Besides that we were big fans of "Turtle Tuesdays" at Turtle Crossings, we loved the Lobster Rolls in Montauk, and will still will hold Tutto Il Giorno in Sag Harbor as a restaurant of choice. We could always count on The Princess Diner and Slo Jacks for a quick cheap bite to hold us over...conversely, we could rely on Nello to screw us over.  Bobby Vans treated us with superb steaks that were almost as good as Omaha's.  We went eating with eater, and tried peanut butter & bacon sandwiches at Candy Kitchen. We picked out our own lobsters at the Dock House in Sag Harbor, and celebrated birtdays at Sunset Beach.  We tried the BBQ at Townline, and interviewed at Talkhouse. We fell in love with Farmstands. There was lots of oysters, and even more lobster rolls. Corn on the cob for this Cornhusker, and even the occasional loaded macaroon. Life was good.

Hamptons Extras: We took advice from team Jill Zarin, gave you "the Juice" on Plum TV, and biked around Southampton with the LOLA crew. We went behind the hedges with Kelly Killoren Bensimon,   Besides cars and fashion, we searched high and low for our house of the day, the best beach reads, and the best summer songs. We interviewed Hamptonites both young and old.  We rode on Further and Gin Lanes, and memorized Scuttlehole's secrets like the back of our hands.  We laughed at Hampton Cliches.  We loved the one we were with, found out how the other half Hamptons, dodged those fiesty cops, and learned how to maneuver a kettle bell.  We ran, we biked, we swam and we sailed, and we managed to only get one speeding ticket.

Special Thanks: I couldn't have done any of it without the help of Claire Bear (the best right hand I could ever ask for), Douglas Marshall hailing from Amagansett, Dan Honan and the entire cast of Plum TV, (Dan, I would even hold off on the "dirty car" jabs to be in the old jeep riding on Montauk Highway right now), LOLA, Frenchy, Stephanie Wei, Eric Spear, Britanny Mendenhall, Christine Cho, Kelly Will, Lockhart and Ben for deciding against "the Beach" site this year, Rich and Tamie, my Quogue connections, and the entire Surf Lodge team.  A big thanks to Rob Rich and Ben Watts, who made all of our summer's more interesting to look at with captivating pictures. Also, Zev Starr-Tambor you were the best guest we could ever imagine.  J.S. for believing in my 505 skills which were nonexistent and teaching me what a dark and stormy was.  J.J., your beach runs and bonfires were so good we were always hoping for more, and for all of you who helped keep me in the know when my head was spinning circles, thank you, thank you, thank you, thank you!

Claire Willett is taking a semester off in Boston where she has started her own site BostonTParties.

I am in the city working on our main site.  I miss her and I miss summer.