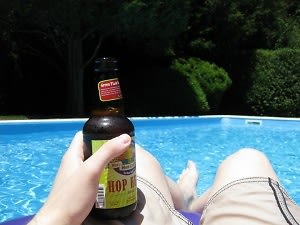 This photo is the closest we'll get to uncovering the identity of the anonymous force behind Facebook's "The Hamptons." Though quite the elusive man, he's proven over the past year that his social media presence is quite the influencing factor among Hamptonites. Meet "The Hamptons."

Considering a significant amount of our time here at GofG is spent stalking perusing the pages of Hamptons-oriented content on Facebook and Twitter, we were of course quite familiar with The Hamptons and TweetHampton. The content consisted pretty much of friendly suggestions on where to eat/play/shop/etc, reminders of upcoming events, and of course their weekly "Trivia Tuesday" competition.  That is, until last week, when they called out local restaurant Dockers Waterside for their policy on publicizing visits from celebrity clientele. A little controversy always sparks our interest, so we thought we'd dig a little deeper to see what makes this social media force tick, as well as get his take on the best eats in the Hamptons, favorite summer drinks, and even the ever-present locals vs. weekenders debate.

This whole venture started because of the reason that men do most things: it was done to impress a girl I was dating at the time. Also, I felt like there was a void in the Hamptons media, as I couldn't find one site that would solely provide objective information on things other than what was going on at the hot spots. I started a Twitter account TweetHampton in early 2009 and began tweeting recommendations for beaches, restaurants and events. It was fairly primitive, but amassed a small following in a matter of weeks. At the end of last summer, I started thinking about expansion, signed on three partners, created the Facebook Fan Page and then set a budget of $10 for all of 2010 (for the record we have $0.20 left and no plans on spending it).

But no blog or anything else?

Why have you chosen to remain anonymous?  Do you ever plan to reveal your identity?

The issue of anonymity is one that I weighed carefully. My partners and I all chose to remain anonymous because we don't want there to be a "face of the Hamptons". The Hamptons itself are what is important, not us. Yes, people have emailed us asking this question; and more specifically asking how they can trust what we say is objective and that we are not compensated for mentioning a place. I can assure you that we are not, nor have we ever been compensated in any form by any business or person for mentioning something. The only exception is the sponsor for our Trivia Tuesday questions, but we never see the prize ourselves, as we ask the sponsor to deliver it directly to the winner.

But can't you also be somebody in Oklahoma pretending to be in the Hamptons? Why should we trust the recommendations from you and your colleagues?

If you look at the quality of the work our team has put together, it should be evident we not only know the Hamptons, but have been there for a while. My partners live out here year-round, as does our stellar jack of all trades employee. I probably am the weak link in that I only am out on weekends, but I think the fact that I have been going to the Hamptons now for four decades should give me decent knowledge of the area, be it during the summer season or the rest of the year (I love spending winter weekends at my house too). We know our Hamptons bars, restaurants and businesses and we span a few different generations, so we can give Hamptons a wide variety of Hamptons recommendations to a wide variety of demographics.

So, you recently started a bit of a debate on your site (and ours!) by calling out Dockers Restaurant for their policy on broadcasting celeb sightings on social networks. What made you decide to make your first ever negative post on the site?

Well, it was a tough call on whether or not to go negative on a business. We talked about the pros and cons, took many factors into consideration, but ultimately asked ourselves how we would feel if a restaurant had done this to one of us without our permission. It was expected that people would disagree and we hoped the piece would foster debate, as well as commentary, which it did. However, it was a little shocking that some people viewed our post as our being out of line, questioned what made us the self-appointed watchdog of the Hamptons and accused us of not practicing proper journalism.

Some people neglected to realize that we wrote an opinion piece and have never claimed to be journalists and that we've never referred to ourselves as the watchdog of the Hamptons or anything of that nature. We noted how Dockers had been routinely engaging in what we believe to be shady business practices and how even their own employee handbook forbids their employees from using social media to mention who they see there.

Does having chastised Dockers for what you termed "shameless self-promotion" signal that you will be taking The Hamptons/TweetHampton in a new direction? Where are you going next?

No. We have no plans to engage in frequent negative statements. In fact, the Dockers episode was something that we regard as an abnormality. We don't plan on further negative posts. Actually, we are now starting preliminary discussions about how we can improve and grow for 2011. We'd love to institute a video series where we taste food and wine, as well as pay a visit to local businesses like Richard York Shoes, Khanh Sports, Tate's and Schmidts, as well as many others.

There has always been a tension between year-rounders and weekenders. What's your take on it?

Personally, I have really come to sympathize with the year-rounders. My first job of any kind was a menial service job in East Hampton. People would treat me like dirt and assumed I lived out here year-round. Being treated like I were a second class citizen was something I did not enjoy and I don't think year-rounders appreciate it either. At the same time, year-rounders complain about how weekenders ruin everything and should just leave. They need to realize that weekenders are vital to the local economy, even if they're going to spots owned by other weekenders. They spend money across the East End and are a source of much needed tax revenue. There is a symbiotic relationship between both camps and both groups should take a deep knee bend and calm down a bit.

So how does the face behind The Hamptons spend weekends out East? What are your favorite spots and activities? Do you have a special Hamptons drink?

My own weekends in the Hamptons are spent rather quietly. I make sure to spend quality time by my pool with my dog, host dinner parties, play full contact croquet (you haven't played croquet until you have been tackled mid-shot), bike, head to the beach and enjoying the great restaurants the South Fork has to offer.

My favorite bar is easily Rowdy Hall in East Hampton, as it's a fun spot to enjoy a drink. As far as my favorite restaurant goes, it's a tie between La Fondita in Amagansett (great fish tacos) and Starr Boggs in Westhampton Beach (I've always been wowed by what I order).

Hamptons drink? Easily anything that involves the mint I grow in my garden. Many years ago, my family created a special type of mint that could make a glass of castor oil into a great drink.

And lastly, what is your overall favorite thing about the Hamptons?

The sunsets. I've never seen such brilliant ones in my life. There truly is something magical about them.

[Photo compliments of The Hamptons]