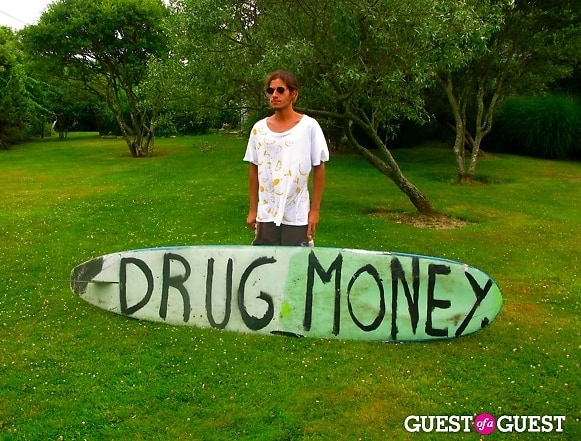 So here he is, running his entire business out of Montauk. It's been about 2 years running for Drug Money Art and there's no sign of stopping anytime soon. Originally from Argentina, Ojeda came to America and split his time between Florida and the Hamptons until he finally settled in Montauk full-time.

"I fell in love with this place," said Ojeda and his love for the area inspires all of his t-shirts, scarves, books, and boards, all of which he crafts himself -- and all by hand. Ojeda's Montauk studio houses multiple screen printers, where he prints his own, hand drawn designs onto super soft blanks that he sells all around the world, including London, Berlin, and Tokyo.

Because Ojeda does all of the work himself, no two shirts are the same, making them more than just a t-shirt but individual pieces of art. And not just art, but funny, witty art. Messages screened on the shirts are light hearted but ironic, such as "Beauty is Boring" or "Ignore Bliss". Ojeda also pointed out to me that some of the shirts have a message screened on the inside, just as a little surprise from Tin to you; it's that personal quality about the shirts that makes them so amazing. But we're not the only ones who think so. Barneys New York was one of his first buyers. Barneys! Ojeda started at the top and now sells his work at eleven retailers, but will probably stop there. Exclusivity is part of the Drug Money Art charm and Ojeda wants to keep that sacred.

If you want to tap into some of his creative genius, take a look at his blog Nothing Will Change. All of the photography is done by him, all of the models are his friends and the majority of the posts are done by Tin himself.

Tin's latest endeavor? Marriage. When we pulled up to his place in Ditch Plains, there was a huge van in the driveway and the back window read "Just Engaged!". It was actually his wife Lisa who had prodded him to begin Drug Money Art in the first place. He had just proposed to Lisa 3 days prior to our interview on the full moon at the beach. When we asked him about it, he told us the whole story and also informed us that the van is his profile picture on Facebook. So cute. Although a date is not set, they are planning to get married on the water on their surfboards while their friends and family watch from the shore. Perhaps he should also consider wedding planning?

For more information on Drug Money Art, go to their website HERE.