While the majority of celebrities and well-known names at the Ross School Grand Slam Tennis Match yesterday had their children and tennis rackets in tow with them, Aubrey O'Day had her dog and a mini-entourage instead. Here we have Ginger, Aubrey O'Day's preened and primped white ball of fluff, who showed up at the tennis match in a white and sea-foam green sweater that matched her fur (obviously dyed by her "mommy", Aubrey). Ginger's ears and paws corresponded perfectly, but we were slightly disappointed to see they didn't match Aubrey's... get-up.

But it's okay, because Aubrey never seemed to actually hold her precious pup - but what's an entourage are friends for? And apparently Real Housewives of New York too, as Aubrey O'Day tweets (with twitpic): @AubreyODay Lou Ann (or something)from housewives of NY with Ginger! about 23 hours ago from TwitPic. The pup was also sporting a bow on the top of her head in a different hue of blue as well. We're glad to see Aubrey enjoyed the event as much as we did...

@AubreyODay just went 2 an exclusive hamptons event, left, copt a squat behind a port a potty & now eating 711 drinking mikes hard lemonade! love my life about 9 hours ago from mobile web. Drats, all we did was go home and watch a movie. That Aubrey. Now she really knows how to have a good time. 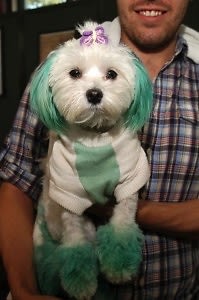