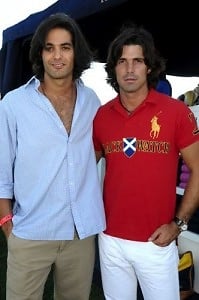 [Picture via Rob Rich] Look at what the polo ponies dragged in last weekend at Blue Star Jets Field. Two gorgeous hunks, with their long dark locks blowing in the wind! At first glance you might think these two are twins - or at least brothers - but don't be fooled. Any polo fan would recognize that the Latino heartthrob on the right is none other than Nacho Figueras, who has been tearing up the polo field all summer for Bridgehampton. But who's the other hottie to his left? Well, that would be Maximiliano Palacio from Real Housewives of New York, who has been linked to both Kelly Bensimon and LuAnn de Lesseps (you might know him better by the nickname Kelly referred to him by on the show: "Max-Max"). Rumor has it that the Argentinian actor might be playing Samantha's latest love interest in the upcoming Sex & the City 2 movie. Wouldn't be too surprising - we know how Samantha Jones loves her younger men, and it certainly seems like Max-Max loves his older women. Regardless how that situation flies, we appreciate his laid-back look of a slightly buttoned shirt and casual slacks. And props to, Nacho too, of course, for sporting that Ralph Lauren shirt. A walking advertisement campaign - as always.