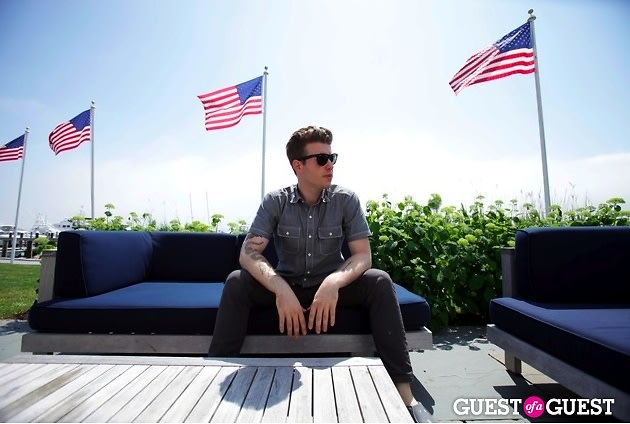 When Nicholas Forker, the artist responsible for the astronaut sitting on a couch outside the Rag & Bone shop on Elizabeth and Houston, decided to move to New York City to become an artist, it didn’t involve a job opportunity, friends or family who already lived there, or even money. Forker flipped a coin. One side for New York City, the city of bright lights, the challenge; the other side for Chicago, a city close to home, the easy way out. Seven years ago Forker’s coin landed on NYC - and he never looked back, but something tells me that even if he landed on Chicago, he would have made the move anyway...

Forker grew up on a farm in the suburbs outside of Chicago. He had a pet goat. He played Little League and his dad was the coach. He practically grew up with ultimate American boy experience, but never quite took to it. In grade school Forker doodled, drawing Garfield caricatures on love notes and adaptations of the mean bullies. His drawing got him out of class working on the latest poster board that was needed for whichever bake sale or school dance that was happening. Not to mention his immense talent at an early age; at just 4 years old Forker was rendering life-like clowns. This continued on as he has remained an autodidact - an artist with immense ability without any formal training or classes. 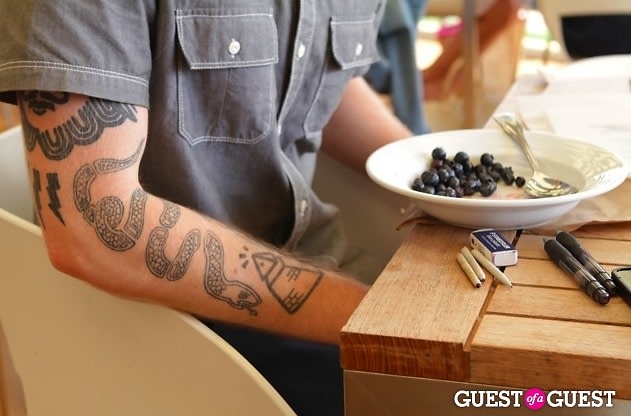 Forker reminisces about his big move to the east coast,

“I had about $2,100 and I answered a Craigslist ad for an apartment for $700 located in ‘SpaHa.’ Not knowing the city I thought, ‘Well SpaHa or SoHo it’s got to be pretty close right?’ But then I soon realized that it was on 117th street and 1st ave.”

“I lived above the original Patsy’s pizza with a Taiwanese woman who was paralyzed from the neck down. That was my first New York experience. It was pretty surreal,” he laughs.

But Forker didn’t let his initial circumstances deter him, he knew he was there for a reason, and that was to establish himself as an artist,

“I think New York lives in infamy, like in the mindset. For something to exist in New York City it has to be so thoroughly vetted, because there is so many people that have done it before and so many people clamoring to do it that if you don’t do it in the best way, it will quickly be brushed aside,” he says. “I wanted to see if I had what it took to make it there. I wanted the challenge.” 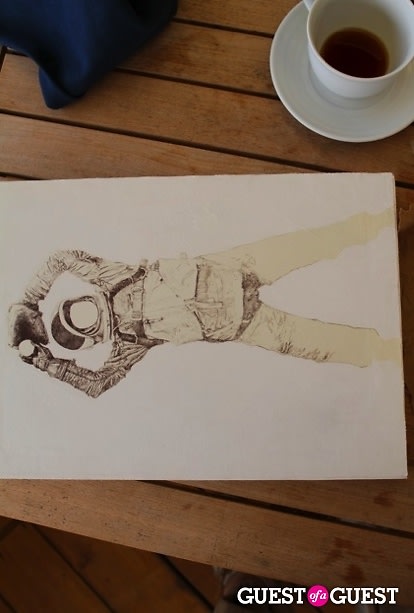 Here, Forker draws his interpretation of an astronaut as he winds up to throw a pitch.

It is quite clear Forker isn’t afraid of a challenge, in fact he takes them head on. Once he was offered an opportunity to work as an artist designing packaging for various watch companies, he immediately quit his job as a waiter on Bleecker Street, deciding that this was it. Now or never - he will be a working artist.

“Everyone’s life is about making, if you are actively creating then you are not playing catch-up. If you are content with just sitting there doing as little as you need to do to keep you busy, you will be behind, but if you create something, and take on some sort of creative endeavor, you are forging your own path.”

Forker’s tool of choice for forging his path? A ball point pen -- fairly standard and ordinary artistic instrument, but that’s what Forker enjoys about it.

“It’s a blunt instrument, the underdog, it’s something you use everyday. It’s not something you think of in fine art, and I like it that about it. It’s just this ordinary instrument. And many people seem to have trouble working with it.” 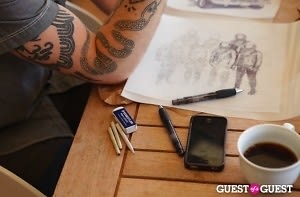 With it he can create spectacularly detailed drawings, which mostly consist of astronauts doing mundane things, such as posing for the high school basketball photo, or sitting on a couch (one of which can be seen posted outside the Rag & Bone store on Elizabeth Street and Houston). His astronauts represent those wide-eyed dreams of our childhood, and his personal exploration of the moments where we, as humans, accumulate, until those big “All American” dreams of “becoming an astronaut” fade out.

“The astronaut is an interesting metaphor for our generation, the later half of the 21st century... as Americans we are told you can be anything you want to be, you can be an astronaut, you can be president of the United States, but now the government has cut funding for NASA.”

Oh, the irony. The point being,

“When does it change? When do you stop being wide-eyed and thinking you can conquer the world to just kind of settling into a very normal life?”

Though his artwork is displayed more indoors, presented most often in galleries (he recently did a group show with Shepard Fairey and has collborations with Marc by Marc Jacobs, Levi's, and Janel Monae), his piece on Elizabeth and Houston evolved out of a conversation. The block is notorious for getting hit by graffiti artists and mangled by stickers. “I figured if we put some better art up, they would leave it alone for the most part.” And that they did. 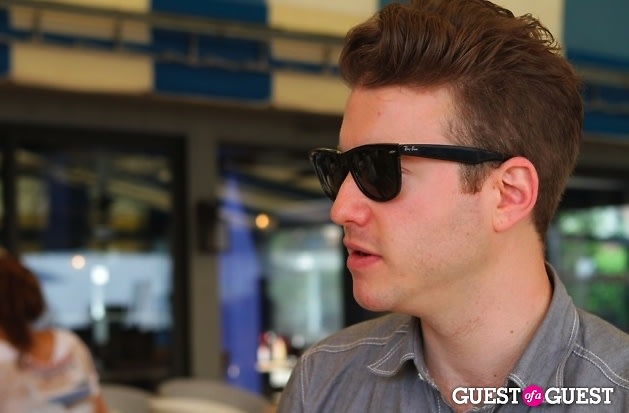 Forker admits that his inspiration comes in many forms, but mentions music as strong force in his creativity. Some bands he mentions are Miniature Tigers, Clap Your Hands And Say Yeah, Neutral Milk Hotel, Wolf Parade, Sunset Rubdown and Frog Eyes. He lists “Go The F**k To Sleep” in his repertoire of books. He’s a self-proclaimed yogi and comic book junkie and when he’s in the city, you can now spot him in Brooklyn, usually hanging around Roberta’s eating pizza or checking out the Brooklyn Flea. In the Hamptons, he is usually eating a meal at Lunch or spending some time at the Montauk Yacht Club.

Nicholas Forker will be showing in the Hamptons this summer at Voluptuous Panic: The 18th Annual Watermill Summer Benefit on July 30th, taking residence at the Montauk Yacht Club in June and July, while prepping for his solo show at Malick Williams Gallery. 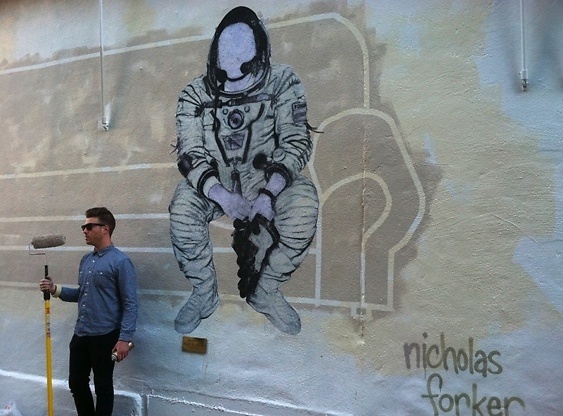 Forker and his mural on Elizabeth and Houston.