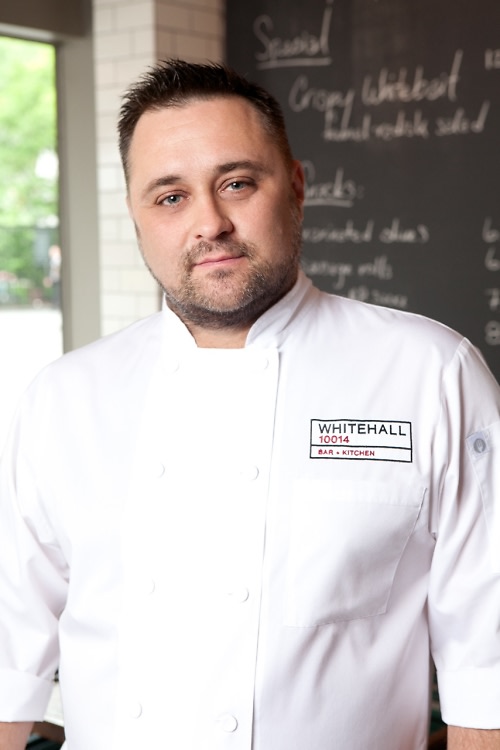 Since the reincarnation of the Surf Lodge this summer, Montauk has been buzzing about the changes to expect: Will it really be more family friendly? Who is replacing Chef Sam Talbot? What will change and what will stay the same? Byron at the Surf Lodge, the new Aussie-inspired restaurant within the hotel, is now a part of The Highlands Restaurant Group, with hopes to develop a more mature and restaurant-based reputation (no more Jäger behind the bar!).

We chatted with the new partner and Executive Chef Chris Rendell, formerly of Whitehall and Public in New York (among other prominent eateries), to clear up any rumors about the new menu, the new ownership, and the new vibe.

You can just start off telling me about some of the changes that you've made here since you've started. I know the menu is very different.

Yes. Obviously starting with the menu sort of going more in my direction, not so much a different direction, but just a different chef, a different perspective, different tastes, different sort of ideas and philosophies. The way I cook is a bit lighter, fresh, clean -- the less is more approach to cooking.

Can you talk about some of your favorite dishes on the menu?

I think definitely the fluke. It's steamed fluke with the sesame broth, bok choy and pickled ginger salad -- that's been flying out. The fluke we've been getting is just incredible, it's really, really amazing. All the fish we've been getting from Gosman's is spectacular.

So that means you buy local?

Yes, our fish we're getting through Gosman's, which is local. As the season moves on, definitely vegetables. We'll be using a farm called Balsam's farm. Ian Balsam is known for his corn out here and his tomato... The season hasn't really started for these guys right now, they're growing. By June and July they're really in full swing, so end of July. By then we'll be good to go with all sort of local greens, and vegetables and corn and tomatoes.

Where are you from originally?

I was born in Adelaide, grew up in Melbourne, and lived in Sydney for a while as well, so I'm a bit of an Australian Mongol. I jumped around a little. Then I moved to London for four years, then New York, then back to London, then back to New York -- so I bounced around the Atlantic for a little bit. In New York I opened up a place called Public down in NoLita, then back in London i opened up a place called Mews in Mayfair, then I was sort of was missing New York so the AvroKO guys invited me back to open Double Crown on the Bowery. I was with those guys for six years doing different jobs and tasks and places and opening, it was great. I was working with Brian, Mary, and Donald, they had been the bar managers at Madam Geneva behind Double Crown, and they were always planning to do Highlands for a very long time, and when they started it I sort of jumped on board about a year ago with them to do Whitehall.

How did working with Surf Lodge come about?

Jayma and Neil were frequently at Whitehall, they loved the idea of simplicity of the whole fish on the plate with the potatoes and baby gimlet of salad. They thought that sort of idea maybe the more British aspect going with the beach and that sort of connection worked better. So that's how it came about.

And then you jumped on board?

And then yeah we jumped on board like four weeks ago.

Yeah, it's been a whirlwind turn around, I'm still spinning. [Laughs]

Had you been to the Surf Lodge previously?

Yeah I have been here before, a few years ago. I would come in and have a few drinks and stuff like that.

So what do you think of the new vibe?

I think it's great. I think it's definitely a good way forward, a change. It's not the new Surf Lodge, it's just a different Surf Lodge. As the crowd has grown up, the space has to grow up with it as well. To respect the neighbors and what's around here, and to welcome change. And with Mike Walwrath, the new investor -- he's a local -- in respect to him as well.

Can you talk more about Mike? How did he get involved?

I'm not too sure, he's been down here, he frequents here. He's opening a restaurant down by the docks called Lenny's, so he's about to open that up as well. He's in the restaurant game as well. But other than in that respect, I don't really know. No comment.

Do you have any big plans for the summer? Or anything specific in line, any events?

Not so much like full on events, we always have bands playing here on certain nights of the week. It sort of brings a good crowd. Wednesday really seems to be a local sort of crowd with local musicians, but in terms of actual set events for this season I think we don't want to over extend ourselves. We're still working on the distance, supplies, purveyors, and staffing and everything like that. We want to get it right the first time around then we can develop and grow and build the brand.

Do you think it's a more cautious approach this time around?

I don't think it's more cautious, I think it's just more of a sensible approach just in terms of getting a hold of everything. I mean, cautious a little bit, but it's more sensible. 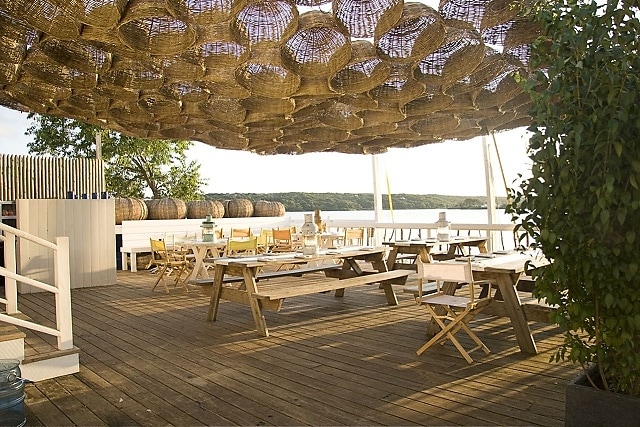 In terms of the front of the house, is there a new way for reservations? I read something about it being more restrictive.

Yes, we aren't going to just let people roll on in to this place, once we get a great security team on and once it's hit a certain number, then that's it. You're not coming in. We don't want this place to sort of swell. We want people to have a nice dining experience. More restaurant focused, as opposed to you're having dinner and someone smacks you in the head with a beer bottle because the place is so packed that you're like sardines. Sure, there's still the deck, and the deck's there to have fun, but the bar's shutting down and everyone's cleared out by 2 o'clock. It creates a different vibe straight away. Even little things -- we're not serving Jäger behind the bar anymore. Just to kind of get that element out of there.

I was here on Memorial Day weekend, and I even noticed a change in the amount of people, Jayma Cardoso was personally standing at the door, and personally selecting who can come in. Before I would only come on Sundays when I wanted to have a drink, because on Saturdays I couldn't move or even breath, but this past Memorial Day weekend the setting was different.

Yes. We've had that feeling the whole way through it's just been a calm sort of roll on. I've experienced it as a guest a couple of years ago, but I didn't really take it all in. Now It's great that it's calm, especially for the dining.

So in terms of dining it's called Byron, which is obviously Australian, surfer-y focused. But is there any other places you've taken inspiration from?

Definitely Australia with its proximity to Asia, the flavors coming from there. Most of the flavors coming from there are clean and simple and flavorful, really. So it's touching on that as well. Australia has the second greatest Greek population outside of Athens. So it's multicultural aspect to everything. You check any modern Australian menu and it goes from Greek to Sashimi to a bit of Lebanese, it's a whole spectrum of food. It's picking bits and pieces.

Tell me more about the brunch menu.

Yes, we do brunch Saturday and Sunday. It's very clean, once again, very fresh. There are lots of vegetarian options. It's not very eggy, not very sweet.

What are some of the dishes available for brunch?

Poached egg with avocado and chili with some toast or salad there. We do a very Aussie breakfast like a fry-up. Poach/fried/scrambled, mushrooms, spinach, tomatoes, local fruits with a vanilla mascarpone, French toast, just to get that sweet tooth in there.

Go HERE for more info on Byron at the Surf Lodge.