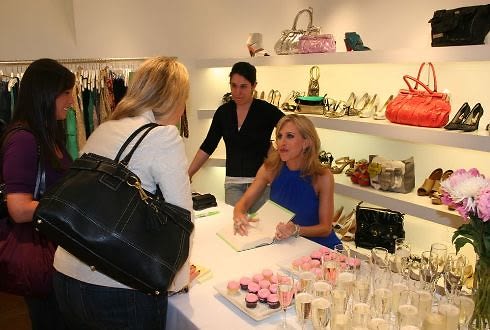 In between book readings, numerous posings with fans across the country, posh parties, and interviews with the likes of Candace Bushnell, Emily Giffin was gracious enough to stop by our humble space for my most enjoyable interview yet. During the lunch, (put on by the staff of Dean and Deluca), I quickly discovered that this two-time NY Times best selling author, no, more importantly; this woman who satisfied my sister and I’s guilty pleasures of chick lit during summers spent on lakes in places far removed from Manhattan soirees, was actually as fun in real life as her words were for me on paper.

Her down-to-earthness is shared with identical parts fabulousness, and both come out within minutes of meeting her. She’s been called “A modern day Jane Austen.” and I like the comparison, as her heroines are becoming equally influential, (though I doubt her predecessor was as hip). Toting her addicting charisma, her radiant smile, and her new book, Love The One You’re With (which I finished in two days), Emily dishes out her real life tale… a best selling story in itself.

When did you know that you wanted to be a writer? Well, I’ve always been interested in writing. It’s sort of one of my earliest passions. As a little girl I would write stories and poems. I still have them all saved I would say as early as four or five. I used to say “I want to be an author when I grow up.” I thought about Journalism, but there was something about going to college and graduating, It sort of felt like a weird thing to all of a sudden, graduate from college and try to write a novel. I was less interested in journalism at that point. So, I went to Law school by default.