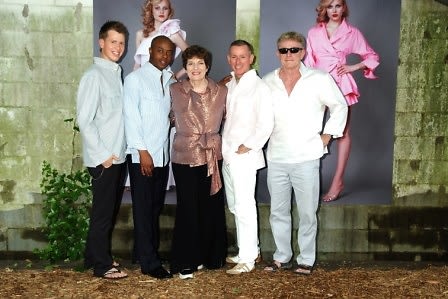 [All Photos from Rob Rich]

The Gin Lane collection is inspired by the elegant Southampton women of the 1930's who dressed to go to the Beach Club on Gin Lane. The collection features seersucker, in a new fresh silhouette transforming it from a traditional fabric to one that is both sensuous and glamorous. Jackie Rogers’ Gin Lane collection features jumpsuits, rompers, mini-trench jackets, wide leg pants, flared shorts, tap shorts and ruffle blouses. The collection also has items in cotton denim and cotton sateen trimmed with grosgrain.

The new resort collection is creating a tremendous buzz and attracting a new fashionable clientele including Bethenny Frankel of the The Real Housewives of New York City, Christine Baranski, Lindsay Lohan and all the young socialites.

Jackie has stores in New York, East Hampton and will be opening two new stores in Palm Beach in October, one of which is dedicated to the Gin Lane collection.

Her newest store at 50 Jobs Lane represents her first retail venture in Southampton since her infamous Pizza Parlor in the 1970's.