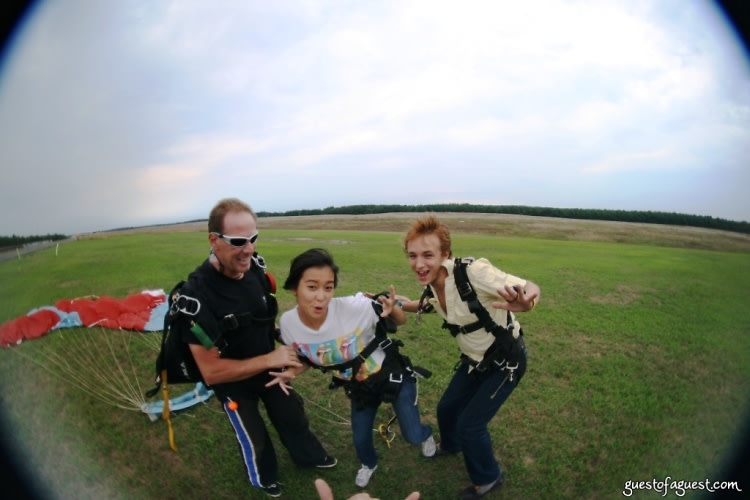 [From Stephanie and Liam's skydiving adventure]

This past weekend, at the Red Cross benefit in East Hampton, George Gurley approached us to ask to describe our summer out East this season.  I couldn't come up with anything "juicy" enough for his column ("Summer of Surf Lodge?" didn't seem to hold enough scandal for him), though I pointed him to a couple of friends who I was sure could satisfy his debaucherous-seeking pen. Stephanie Wei and Liam McMullam gave him a full account of their sky diving adventure, for his piece titled: "Stephanie Goes Bombs-A-Wei From Plane In Lark With Liam McMullan", as well as some fabulous one liners from Stephanie that are too good to not share:

"After declaring it the summer of debauchery, decadence and absurdity, she said the Hamptons feel forced this summer, like Disney World."

“It’s just that everything is a little bit over-the-top,” she said. “I walk into parties sometimes and it’s like, did they import these people?....

"Did they hire these people to come to this party? Like theGossip Girl party last weekend. I walk in, it’s their premiere party, everyone is dressed the same, everyone looks like they’re one of the Gossip Girls … and it was weird because everyone looked the same.”

“And it’s like this summer, we’re like in a recession,” Ms. Wei continued. “People are losing their jobs. People don’t have money, people are unemployed, there’s like other issues. And like literally I come out here to come to the beach and relax."