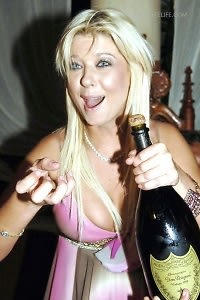 via la.guestofaguest.com: My Google Alert for the Queen of Hot Messes, Tara Reid, also includes the phrase "Jägermeister + Overdose," so I confess that I might be a little late to the news that the American Pie and "Taradise" star was engaged and married, all seemingly in the span of a couple of hours, whilst in Greece with her now-husband, a guy named Zack Kehayov.

Early reports claim he's a Danish businessman, but her last finacée was a Danish businessman, so who knows. What we do know for sure is that ol' Zack is doing just fine financially, based on the size of that alarmingly massive engagement ring Tara tweeted earlier. If that rock were any larger, you'd have to imagine she'd be trying to smoke it. Living the American Pie dream, eh there Tara? MORE>>