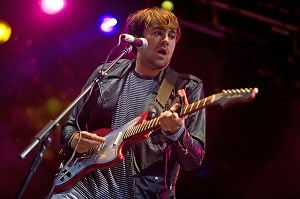 Wait a second, did we miss something? When The Vaccines played their set at Escape to New York they got into a fight at the end and security came out. Apparently, the lead singer strangled the guitarist with a bra someone threw on stage, and then the guitarist ran into him twice. The lead singer put his elbow up and caught him in the face twice. Next, the guitarist ran and jumped into the drum kit, and as he got up pushed the drummer super hard. Was this staged? Was it for real? Any ideas? Lets us know! We want the deets! [Photo via]