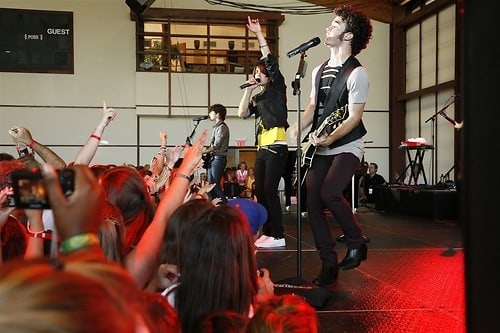 [The Jonas Brothers at Ross School. Photos via Hanging in the Hamptons]

The Ross school was the site of yet another concert this weekend.  Last summer, their concert series was a huge hit, including artists like Prince and Billy Joel (who's daughter, Alexa is an alumna).  For a cool $15,000 you could buy access to all five concerts.  This year, the Jonas Brothers kicked off the beginning of the concerts at Ross, of which all proceeds will go to supporting their generous tuition program (over 40 percent of the school's 600 students receive scholarships).

If I remember correctly, the coolest thing my school did over the summer was sponser a weekend camping trip.  Can you imagine going to see the best concert series in the Hamptons (@Ross) at your very own school?  Pretty cool.  Also cool, Aretha Franklin will be taking the stage at Ross later this summer.  Oh and, there's that whole Tony Hawk thing that happened last night.