In 1996, a member of the "world's most exclusive club" decided to start a revolution on a random Thursday each June.  No, this didn't involve opening up the upstairs of Cipriani's downtown to the "normal" folk, this was a much bigger phenomenon.  It was in mid June in '96 that Trent Lott, the senator from Mississippi, decided to put in place "Seersucker Thursdays" for the entire Senate Republican Senators to uphold.  This has become dubbed the "Annual Rite of Washington Summer" after Lott decided it was time to revive the long-forgotten tradition and show that "the Senate isn't just a bunch of dour folks wearing dark suits and...red or blue ties." Hmmm...let's take a look at the picture below, nope the seersucker does nothing to take away the dourness, maybe stealing some outfits from the gays posted on below would be a more productive way to do this. 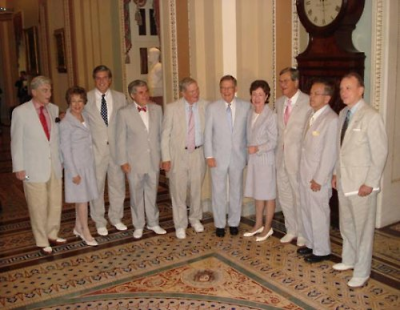