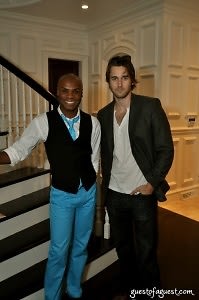 Go HERE for more photos by JT WHITE to tag you and your friends!

These cast members of the upcoming film Trophy Kids were decked out for the Social Life Magazine party this past Saturday. Taking different approaches to their party garb, both definitely looked like the movie stars they are. The boys who play self-entitled, coddled 20-somethings in the NYC based film partied with fellow cast members at the Social Life estate before heading to AXE Lounge at Dune. Nathan Lee Graham, who you may remember in movies such as The Devil Wears Prada, chose to match his light blue tie to his pants in a very Hamptons appropriate color combo, while Ryan Eggold, the CW's 90210 high school teacher hottie, picked a more laid-back look.

His white t-shirt and jacket combo had us almost as weak in the knees as his fictional students on the television remake. Even though he told us he was fighting a cold, we couldn't tell one bit in that get-up.