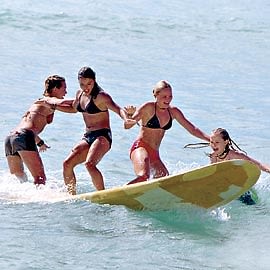 [Kate Bosworth, her hot bod and crew in Blue Crush. Photo via EW.com] Want to celebrate summer this last weekend but aren't really the beach type? Or the BBQ type? Or club type? Or, eh, well ok, we get it, we're not quite sure what you do then, but we have an alternative for you. And if you're just too burnt for the sun from this summer, there's no better way to seek refuge and still enjoy those last few days than a good old fashioned movie. While we're out prancing around on the pristine beaches of the Hamptons, chowing down on perfectly cooked burgers and dancing around till the sun's nearly up like summer may never come again, you can enjoy these final days of the season with our list of the Top Summer Movies. So here's some of the best of the best, including our own personal office picks. Turn up the air, break out the aloe for that burn, and try not to weep - summer's not over quite yet!

Sarah Kuntz makes a very valid point - no matter how old you are, who doesn't want to jump on a big giant blob?

Nantucket based, just like our Newsletter Editor, Sarah Mandato. Plus, it's got John Cusack. Winner!

No one does the Hamptons better than Jay Gatsby. Not even us.

Because this is when my girl crush on Kate Bosworth started and it's only escalated since.

Because this is when Kendra's crush on Paul Rudd started and it's only escalated since.

If only this is what summer lovin' was like in real life.

Chiara's says its worth watching again and again to see the scene where the kid pretends to drown to get CPR from Whitney Peppercorn. We agree. Oh, and James Earl Jones. In case you forgot.

Adolescence summed up in under two hours and one season.

Rachelle's so right on this one. Because in what other movie do employees play monopoly with their dead boss? On vacation?

Kids being kids. Being bad kids. Good moral standards for us all.

Struck a fear of the ocean into hearts of thousands. More room for us.

What did we forget? We're sure there's tons. Let us know, because when the leaves start changing, and we're grasping onto our summer memories, we'll be dying to stock up on whatever we can get our ends on in hopes of preserving the final days of our summer season. Fill us in!