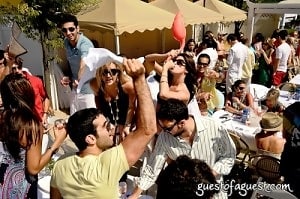 [It sure was a fun weekend, but will these guests be invited back? More photos HERE] Last year, you were invited to the Hamptons almost every weekend, and this year, despite all your hinting, you haven't been asked once. Strange? Not really; you were probably a really horrible houseguest. Check out our list of terrible house guest traits, and if you recognize any in yourself, you might want to work on perfecting your guesting before next summer.

1. You didn't bring or rent your own car.

Unless your host expressly mentions it, they probably don't feel like acting as your chauffeur the whole weekend. The best guests are independent, and nothing says "independence" like arriving with your own mode of transportation.

After opening the fridge, your host called his friends in Manhattan, just to make sure there wasn't some big food shortage he wasn't aware of. It wasn't just the fruit and the cheese that you gobbled up: it was the frozen wedding cake in the freezer and the can of tuna from 2002.

Listen up, food is expensive these days, and Hamptons food doubly so. We're sure your host won't mind sharing, but even if he says to help yourself, keep in mind this golden rule: If it's not open, don't open it, and if you finish it, replace it.

3. You used all their towels, and left them crumpled around the pool.

If you are the house guest of Donald Trump, don't sweat this one: he's probably got it covered.

If you are the house guest of friends who put their salaries together to get a share for the summer which probably doesn't include maid +/ towel service, hang up your damn towel, and use it again the NEXT day, too.

4. And (in case you did stay with Donald Trump, or at a country house in England) you forgot to tip.

If you are really really lucky and got to stay with friends wealthy enough to have quite the Hamptons set-up, complete with maid AND towel service, remember to tip at the end of your stay! This is especially true if you're crashing with our neighbors across the pond: the maid who has been making your bed and unpacking your suitcase and washing your towels definitely deserves a little something for her efforts. 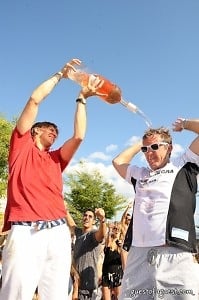 5. When your friend invited you for the weekend, you gladly accepted...and brought along Jim, James, Paul and Tyrone.

If you are invited to the beach this summer, it is because the host requests the pleasure of your company, and yours alone...don't subject them to your friends, no matter how "great they are once you get to know them"!

It's not the gift that matters, it's the acknowledgment that your host is doing something kind for you, and you appreciate it. If you just can't think of anything to bring (and really, this shouldn't be the case given GofG's daily gift guide), take them out to dinner, cook them dinner, buy them a drink, etc. You don't have to be extravagant, but you do have to be polite.

7. You complained about the amenities.

Yeah, the Marriott's down the street, kid.

8. You ditched your host.

Leaving for a party twenty minutes after you show up (a party you did not invite your host to!) is bad form. Using the host's house only to sleep in and barely spending any time with the people kind enough to invite you is not only bad form, it's cheap. You won't be invited again.

9. You extended your stay.

Did your host beg you to stay? Note: a nonchalant "Well, you could stay..." after you've complained about not wanting to leave, or a facetious "It's too bad you won't be here Monday for such and such" is notbegging you to stay. Did she get down on her knees and literally place herself between you and the door? Only then is it permissible to extend your stay. Otherwise, she's probably looking forward to getting the place back to herself.