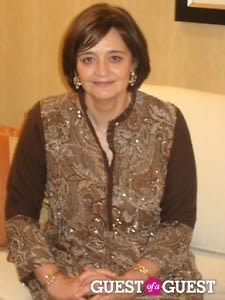 Last night we went to Cherie Blair's suite on the 34th floor of the Essex House. As she sipped an early evening spot of tea and lounged on the couch, the wife of former UK Prime Minister Tony Blair talked about her humanitarian efforts, her husband's Blackberry addiction, and misguided portrayals of herself in pop-culture.

as we entered to find her nestled on the white divan and tapping away.

Kathryn, her 22-year-old daughter is reading law at university, and Blair was perusing a Guardian article  with her daughter in mind.

"One of the courses she’s doing is medical law," Blair said, "And I thought, ‘well, this is quite an interesting thing,’ she’s got an essay to do, so I was just emailing her the link and saying, ‘have a look at this, it might be helpful.’”

Blair, who has three kids in their twenties and one ten-year-old, admits she is ever playing mother, despite her recent load of traveling. And what an exhausting dose she's had.

"I was in Brazil last week, so I got back from Sao Paulo to Madrid Saturday, and then Sunday I was back in London, and then I came here this morning. I fly back tomorrow night, and then, for a bit, thank God, I stay put. "

She arrived in New York that afternoon and was talking a brief breather as dusk started to settle in over the Central Park view. She had a full evening agenda ahead for the Loomba Foundation, an organization she has rallied behind to help support the 245 millions widows of the world--many of whom live in abject poverty. The germ of her attachment to the cause finds its origin in her father, Tony Booth--a famous British actor who starred on the British TV series "Till Death Us Do Part" (from which the American "All in The Family" sprang)--who left her mother, Joyce, when Cherie was eight. 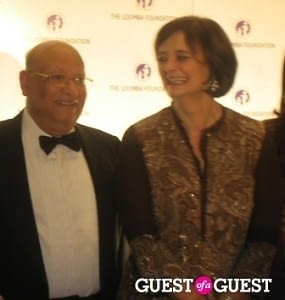 As she curled on the couch in a brown Surekha Jain dress, intricately embroidered with sequins and a traditional Indian flare, she relayed the reasons for her peregrinations and her substantive involvements therein. For the South American foray, Blair tagged along with her husband, who acts as chair of the JP Morgan International Leadership Board, which had its annual meeting last week.

“Whilst I was there as well, I also went and gave a talk to women lawyers at the biggest law firm in Sao Paulo,”

she said, placing her cup of Harney&Sons green sencha tea down on the coffee table to reveal a vermilion lipstick mark on the rim.

Her Madrid jaunt came as part her work with the European Muslim Professionals Association, a networking group she helped to launch two years ago to improve perceptions of Muslims across the continent.

“I’m a champion for their women’s group to counter the negative or subservient images of Muslim women,” she said.

She then became cognizant of NBC’s Chuck Scarborough’s on the suite’s flat-screen Sharp; she located the remote and with a pleasant smile flicked off the TV.

Yoko Ono, perhaps New York's most famous widow, would be at the dinner that evening, and Blair expressed great anticipation for the artist's presence. Blair, who wants to counteract the idea that women are subservient and disadvantaged, acknowledged the importance "of Asian women who are empowered to do fantastic things."

Blair is, of course, a huge Beatles fan and had met Ono before.

“I was brought up in Liverpool, so I’m a Liverpool girl, who was born in 1954. You know, I was a young girl during the Beatles era. For me it was a great thrill the first time I met Yoko, which was when she came to unveil a statue of her husband in what was called Liverpool Airport and is now called Liverpool/John Lennon Airport. And I was the prime minister’s wife, and I unveiled it with her."

Both were given miniature copies of the eight-foot statue of Lennon.

Blair of course still has her husband, but she expressed a bit of remorse at not seeing him as often since the family left 10 Downing St.

“The biggest shift for me in that I don’t see my husband so much,” she said. “As prime minister, you can’t be away for too long, and now of course with his Middle East envoy job, he’s away in the Middle East a lot. And particularly recently as the pace, if you like, of the negotiations has quickened he’s been doing lots of work behind the scenes and upfront.” 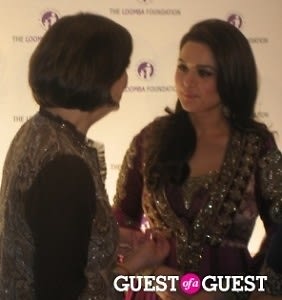 But is she lonely?

“No," she laughed.  "Partly I’m very busy, and secondly, I still have my four children. And just like these last few days, I was actually accompanying him.”

The problem with her husband's peripatetic life style hinges on the former prime minister's aversion to new communication technology.

“Tony’s still not the world’s greatest techie," she tittered. "I mean, for example, he has an iPad too, but whereas I use mine, he doesn’t, except possibly to read books. But he’s addicted to his Blackberry. What he tends to do is we talk on email, and then usually he will email me at one point and say, 'Ring me,’ and then we’ll speak on the phone. I think he might find the idea of doing a video conference a little terrifying.”

To keep up on her Middle East politics, Blair has been reading David Grossman's Until the End of the Land on her Kindle.

"It’s quite intense," she said. "I read a review in The Guardian, and I thought ‘that sounds interesting,’ so I downloaded it from the Kindle store, as one does if you like technology, and I’ve been reading it. But it’s really quite an intense story, and it’s surprising: it is about Israel, but it’s much more about families.”

Given the theatrical strain in her family coming from her star father, Blair reflected about the various portrayals of her character that have appeared in pop-culture.  Of course, Robert Harris's book The Ghost (adapted into the Roman Polanski movie The Ghost Writer) depicts Blair as a conniving ventriloquist of her husband.

“It’s interesting, isn’t it?” she said of the unflattering depiction."I was quite amused by The Ghost, because I thought, ‘my goodness, I turn out to be the real evil baddy, don’t I?”

Blair laughed maniacally, amused at the memory; she'd seen the movie, but never read the book (though has read lots of Harris's work).

“In the end of course in the story, she of course is the one who’s the CIA plant, not him, even though they all think it must be him," she reasoned about the characters based on the Blairs. "I suppose in America that’s not an evil baddy. But that’s obviously the premise of the tape.”

In general Blair focused on what she views as the disconnect between reality and the skewed portrayals.

"But it was fairly strange, not in The Ghost because that was clearly ridiculous, but The Queen and The Special Relationship, it’s very hard to see—and there’ve been other sort of docu-dramas—it’s very odd to see someone who is apparently called your name and she kind of looks vaguely like you--if only I was that thin, you know which would be really nice--and yet of course, they’re not you. They’re not quite, and actually they don’t even do things that you’ve done. It’s a strange thing."

Blair had to get ready to attend the cocktails starting downstairs, but we walked toward the door, she remarked how much she loves the crispness of a New York fall.

“It’s so beautiful," she said. "It may be cold, but the sun today, was lovely. We’ve got this, you should see the wonderful view we have," she said

as she gestured me over to look at the view from her bedroom, as her assistant nimbly closed some ajar drawers.

“Inviting a man into my bedroom is probably a dangerous thing, but you’re all right,” she joked.

A sextant on a tripod pointed out of the window, but night had fallen in an atramentous blot over the Park.

“Oh, well you can’t see now of course, but that looks straight out over Central Park,” she said with almost tourist glee.

She then looked over to the wardrobe where a few copies of her husband's book A Journey: A Political Life lay.

“I’ve got some friends coming tonight, and I’ve brought them a signed copy of Tony’s book, hence…” she said brushing her hand on the stacked hardcovers.

She looked a bit sheepish.

“I promise you, I don’t usually travel with five copies of my husband’s book," she laughed. "I’m not that devoted."

But some would say otherwise, indicating a storybook romance. At the cocktail house downstairs, as Bollywood actresses and philanthropists mingled and washed down samosas with champagne, Bronwen Booth, Blair's actress half-sister (the daughter of Tony Booth and Julie Allan) spoke highly of the Blairs. 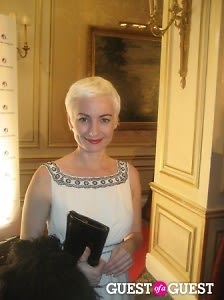 “My impression of them is that they’re lovely. They’re so in love. I made a toast once, and I still think it’s true: one time we were at my dad’s 70th birthday party and Tony was across the room, and Cherie was with me, and I looked and he was looking at Cherie…and she didn’t even notice, and he looked at her like it was the first time he’d ever seen her. And I thought, ‘Ach, one day I want to find someone who looks at me like that.’ After so long, they’re so in love with each other."