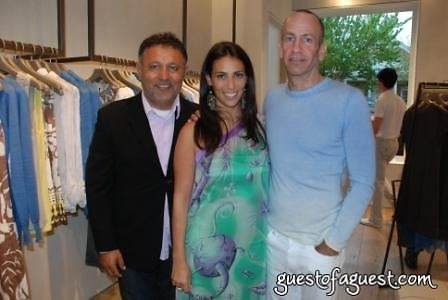 Go HERE for more photos from this event by Beryl Bevilacque

The beaches on the Eastern shores of Long Island are about to get a lot more elegant and artful thanks to the new collection of breezy beach cover-ups (Silk Chiffon Caftan & Cotton Voile Pareo) by artist Kenny Scharf for Elie Tahari. Back in March 2007, Elie and Rory Tahari had a chance to meet pop-surrealist Kenny Sharf at Art Basel in Miami. Tahari has been a long-time fan of Scharf’s work (since the late 80’s) and well, WHO doesn’t love Tahari. So when an opportunity arose for a new and fresh collaboration to put Scharf’s art onto Tahari’s clothing, Sharf and Tahari both jumped.

Sharf created a special painting entitled Floatungle which was then adapted onto fabric to create the Caftan and Pareo for Tahari’s Summer 2008 line. Wearable & stylish art – and that is just the result.

When something so great ensues from such a collaboration, you need to throw a fabulous party to celebrate. Tahari and Scharf did just that.

On Saturday evening, an exclusive group of well heeled fashionable socials gathered at the Tahari Boutique on Main Street in East Hampton to honor the launch of this collaboration. Scharf’s art was prominently displayed on the walls AND on the hangers. The adaptation of the Floatungle painting onto the lightweight bright and sunny pieces is pure perfection. So elegant and inspiring!! Just like the party.

The Scarf for Tahari pieces are exclusively on sale at the Tahari East Hampton Boutique. A portion of proceeds from the pareo will benefit Gods Love We Deliver, a New York based charity that improves the lives of men, women and children living with HIV/Aids.

Delicious passed hours d’ovures were provided by Creative Edge Catering, waiters were dressed to ‘scharf’ in thin belts with the Floatungle print on them. Also on the scene were Plum TV and News 12 Long Island.