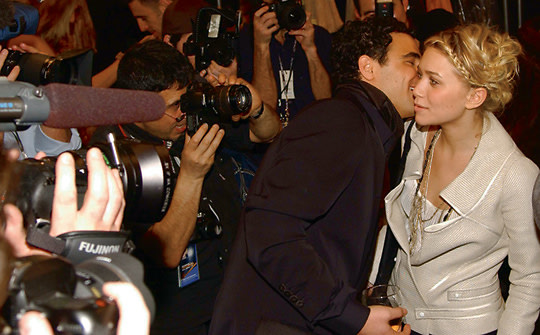 It's no surprise that Hamptons Style would choose to do a feature on Ashley instead of Mary Kate. The classic-with-a-twist yin to her sister's artfully rumpled yang, Ashley has managed to keep her sartorial and lifestyle mistakes (if she has any) out of the paparazzi's vulture eye. The Hamptons are all about the compromise between comfort and cutting edge, and while Ashley herself is skewed closer to the latter, her deconstructed tee-shirt line, The Row, strikes a perfect balance.

The HS article is a bit too hagiographical (I doubt there are many Americans who don't know the twins' entire history), but there are a few gems among the flattery:

"A true minimalist, she is also a whimsical hunter-gatherer, and her impeccable eye for aesthetics comes coupled with a shrewd head for business."

"The world was buzzed out on luxury, and the actresses took couture and put an eccentric street spin on it."

"Without creating a thing, the sisters managed to inspire the global fashion industry-such is the real and raw power of an Olsen."

And from the actress/designer/businesswoman herself:

On The Row: "I wanted it be special; a well-fitted garment, one that was sexy, loose and chic, feminine, but kind of fit like a man's shirt fits a man, not like a woman's fit...The articles were just for me to wear in the beginning, I had no intention of selling them. First I played with a silk Modal and cashmere-the T-shirts were made on lingerie machines using a French seam..."

On individuality: "When I put something on it will be chic, but when M.K. puts it on, it's like rock and roll. So we've never really struggled for individuality with each other."

On the fashion industry: "It's really about relationships and connections, and helping out your friends, and supporting other young people who don't get the greatest opportunities, and supplying those opportunities for them."

This weekend, Ashley will be presenting pieces from The Row's fall collection at Jimmy's in Westhampton (167 Main St), proceeds of which will go to the Juvenile Diabetes Foundation. [Image via Hampton Style]