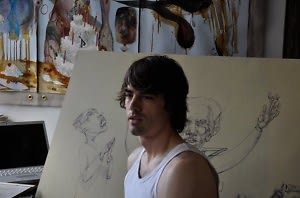 His hair is lustrous. He spells his name with a star between the Nic and the Rad. He really likes art and technology, but he likes people most of all. In People Matter, currently on display until May 8th in the Rare Gallery, Nic has created 99 portraits of bloggers, writers, and commentators. -

The resulting mosaic of faces sprawls across a wall. A fuchsia Perez Hilton solemnly gazes out at the room. Bill O'Reilly glares, his mouth replaced with a blank bar. Violet Blue peeps skeptically from her canvas.  Near the bottom, Salman Rushdie gets kissed by Padma. The paintings are acid-hued acrylics finished with polyurethane ("the store bought gunk you put on your floor," says Nic) to mimic the multi-dimensional sheen of computer screens. You can see the paintings through your own computer screen at Nic's website, but it's far better to pay a visit to 547 W 27th Street.

As with most art, the painting's are even better in person.

In a way the website and other things I’ve been doing are a way to . . . potentially trick people into coming to see it in person. 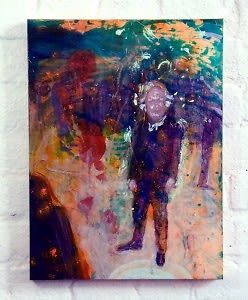 Slyness! Were you prepared to market yourself like that? There’s a gap between creating art and getting people to come see it.

Yeah, I studied the most arcane thing you can study, which is classical painting. I got a degree in illustration before, so I was doing a lot of commercial art, and there was a real rift between hanging out in the museum and loving painting for the materiality’s sake, and then what I spent 80% of my time doing, which was surfing around on the internet and trying to read about shit. So really this project and a lot of my future and previous work are attempts to bridge the gap between being a painter and about how I live in my own culture.

Was there an "Aha!" moment behind the start of the exhibit?

I was working on it for 18 months in terms of staring at these folks. The Aha!  moment went from me picking 99 people without any input from them, and then at a party I mentioned it and someone said, “I have to write about that.” The minute they did that, I got a flood of emails which turned it into a participatory project. The moment was when someone put it on their tumblr and it went “viral.” At that point it became a two-way information stream. 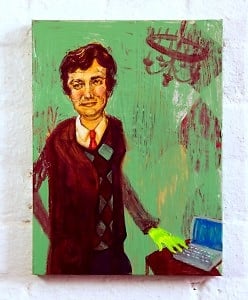 [Laughs. Nic Rad actually seems to love everyone.] I’m not dealing in terms of absolutes. My rejection is a slow “I’ll get to it” and I don’t get to it. Part of it is there’s no specific criteria for my list: I didn’t say the most influential or the best. It’s been randomized. But I have been fascinated because some people have been really persistent to be in and I’ve rewarded that. Also, some people feel very passive: I can tell they’re interested and potentially want to be a part of it, but they feel very passive. That’s usually me in a social situation, so I feel great empathy for that. “Oh that’s me!” I think what I’m really trying to get is an interesting party. Like, I’d like to go to this party.

Other than your Christlike affinity for the meek ones, how do you cull the herd?

I think in terms of my selection, it was the human factor. Like stumbling drunk into the ether of this media conversation. Everyone’s that in it was either a name that was dropped in an article that I read, or an email that somebody suggested in the last 18 months. They came across my radar, and I just picked ‘em! For the next two or three days while I was painting, I just felt “this is them.”

When I’m researching each individual, I’ll do a lot of online stalking. I try to get as close to their persona as a man sitting at a computer can be. Oh, the fake Blitzer twitter account, I had a long interaction with him. I think an interesting portrait is a portrait of psychology, not a likeness. And sometimes that psychology is mine and not theirs. But I’m trying to fight between those two. 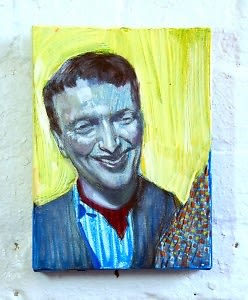 And what you know of the person influences the style of the painting?

I search for the technique on that day and that moment that reflects them. I try to be instantaneous and spontaneous, but I also look at [the show] as a whole. In the case of Bill O’Reilly, I have a very terrified relationship with him, so I wanted to get that down. I want it to be the kind of painting where if you put it next to someone it doesn’t play nice. But because I can’t see the whole thing even when I’m making it, I get surprised when I step back. I’ll say, “I missed that one.”

I keep saying I want each painting to be barely interesting enough in its own right, and incredibly interesting relationally. Ultimately when it goes home to somebody’s loft in Brooklyn or hanging in Hell’s Kitchen, I want that reaction if you walk into the room and see the painting - I’d like if someone who was unaware of the project said “Why is that here?”

Then in 20 years you can have an anniversary show.

I should continue to paint these 99 people for the rest of my life. 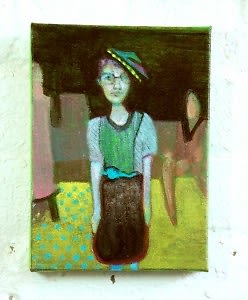 Ultimately, Nic hopes to incorporate aspects of social networking technology into People Matter . At the suggestion of Dennis Crowley from FourSquare, he's exploring ways to integrate his inbox of participants' emails with the show.  Another goal: using mobile interactive services to trace the location of the paintings when they go home with their eventual owners:

Apps are beyond my comprehension, but I like the idea of the disassembled gallery. I love the idea that if you’re sitting in your friend’s apartment and you see one of these paintings, you look it up, you can make a location-based connection.

What determines what gets sold for money and what can be reserved for free?

The paywall is anyone who was in the project but got bumped by someone who asked to come in. When someone new comes in, I put it on them and say who do you want to take out. Some people won’t, which is amazing. 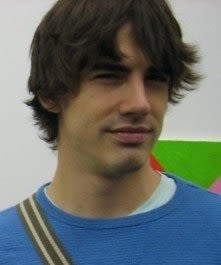 I like that I’m a protector of the meek. Yeah, a flame burns in me as a guy who’s stalking people’s online images to create pictures of them. And I love creating context from nothing, and in some cases the individuals who have bumped others have no contextual relationship, but now they do. I like connecting those dots.

Do people try to dictate how you paint them by providing you with the photo they want you to use?

Some try. I always say no assistance necessary. I’ll find you on the internet. It's funny to me that that creeps people out. People get nervous, but I feel like, wake up, that’s reality! Like, five years ago, anybody could find anybody. When I mention foursquare, people say “doesn’t it dis-serve you when people know where you’re at?” They’ll say it’s really vain that you want people to know where you are but my argument is the opposite! If you think that there are this many people out there that actually care where you’re at, that’s vain! Who’s watching you that that worries you? That creepy element seems to be that one percent of one percent where that would ever be an issue. And to me, this doesn’t feel like a creepy project.

Has anyone been angry that their pictures are in it?

I’ve yet to hear angry, and I hope it’s because they were painted with love even though some of them are, like Sean Hannity’s here is pretty strange, and Bill O’Reilly’s is kinda strange.

Occasionally there’s tweets like, “Someone painted me that I don’t know!”

Rex Sorgatz has the highest recognition rate. Mark Zuckerberg’s at the top – that one is hotly contested. There’s a lot of requests in to own that. 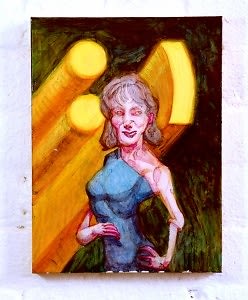 Is that Helen Mirren?

It’s Barbara Walters. I picked her up because Carlton from Fresh Prince of Bel Air referenced how he had a mad crush on her. Now I’m coloring the sophistication of my references. Carlton. I tried to paint her as Carlton imagined her. Barbara Walters through the eyes of – I should figure out that actor’s name. I’m sure he’s out there. I wonder if he’s on twitter.

(As mentioned, the paintings are free, which means that you, dear reader, can reserve your favorite one and aid the formation of a disassembled gallery. It's not as simple as picking your favorite, however - you must persuade Mr. Rad that you truly want it. What works? Nic says you can always try the "carrot and the stick" technique exemplified by Helene Forbes, the salonista who argued that she should get Charlie Rose's portrait because . . . well, here's her pitch in her own words:)

A good model for starting your art collection, guys.