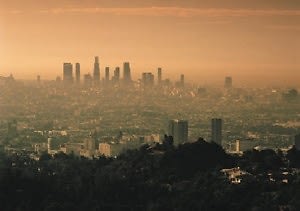 Charlotte Ronson's quote from earlier this morning really got us thinking: Can we imagine actually living in Los Angeles instead of New York? Well we can imagine it, but we don't like to.-

It's no secret that America's two biggest cities have a bit of a rivalry. And sometimes we get pretty jealous when Rachelle gets to leave New York for LA's balmier skies.  But instead of being jealous of LA's 72 degree weather, we're putting our envy to good use, and listing all the reasons we're glad to live here, and not there.

We polled our ex-pat Angeleno friends, and came up with some pretty compelling reasons.

After a hard day of work and an hour in the 110, not even the best radio station/podcast/mix/book-on-tape can distract us from claustrophobia and indiscriminate rage. Even happily single twenty-somethings find themselves with a sudden urge to procreate, just so they can use the mother effing carpool lane. [via]

Didn't you know? Parking is actually ten times more obnoxious than traffic. Because worse than being unable to arrive at your destination, is having to circle the block 30 times until someone pulls out. Or finding a metered parking spot when you don't have change.  Or being towed, because at 8:00 the spot becomes a tow zone, and it's 8:03.

3.  No autumn leaves, or Christmas snow.

Ever notice how in LA, people really go all out on Christmas decorations? It's because they have to make up for the fact that sunny beach weather isn't exactly Christmas-y. Pumpkins next to palm trees? Doesn't really work. And the whole LA trend of wearing scarves and mittens and hats and Uggs when it's 59 degrees out is just obnoxious. We'd gladly trade weather with LA in February and March, but November and December in New York are perfectly chilly and cozy. [via]

In the land of sunshine and superficiality, they have to work extra hard to be appropriately moody and alternative. New Yorkers don't take LA arts seriously, but that's ok because the hipsters take it seriously enough for everyone. [via]

5. Cabs as a Necessity, and not a luxury.

LA makes it nearly impossible to "stop by for a few drinks", because you always know you have to drive home.  It means someone in your group always has to be a designated driver (lame), or you have to get a taxi, which are way more expensive than the New York counterparts!

6. Even "The City" was more respectable than "The Hills"

The most hated character on "The Hills" was a girl who dropped her friends and family for a smarmy, celebrity-seeking manipulative guy who encouraged her to get plastic surgery until she was no longer recognizable. The most hated character on "The City" had a job, ambition, a boyfriend that she kept off-camera. Also, though The Kardashians and The Millionaire Matchmaker have both, unfortunately, moved to New York, we'd like to point out that they are 100% products of LA! [via]

7. New York City has better coffee, and EVERY coffee shop has free wireless.

I feel so bad for LA screenwriters, having to put up with the horrible coffee at Coffee Bean And Tea Leaf just to enjoy free wireless. Some cafes in LA have it, but most don't--infuriating! New York has a cool, independent coffee shop on every block, but even our cheapest coffee is better than the LA equivalent. (Dunkin Donuts for the win!)

8.  "I don't want to move to a city where the only cultural advantage is being able to make a right turn on a red light."

Woody Allen said it best! OF course, we'd be naive to completely discount LA's arts scene, which has some of the best theater, opera, and music in the country. But at best it matches New York--doesn't beat it. And for every impressive LA museum (The Getty, MOCA), Brooklyn has 10 and Manhattan has 20.

9. Everything is happening in New York!

When we're in New York, we hardly ever hear of something happening in LA and get bummed to be missing it. When we're in LA, there are always 100 things going on in NY that we're missing out on. This week alone, the VH1 Awards, The Guggenheim Gala, The Glamour's Women Of The Year Awards, and The Victoria Secret Fashion Show. And it's only Wednesday!

and one reason we're jealous...

We just ordered from La Esquina today. They were out of avocados. What. The. Hell.

Alright Team LA, hit us with your best shot!