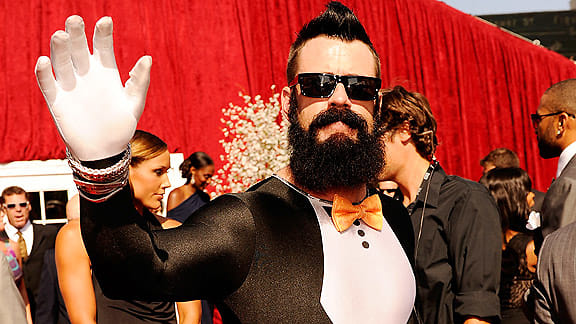 I don't really like to talk about the ESPY Awards, which happened last night at the Nokia Theatre, because the idea of a sports awards show seems extremely unnecessary. We already have sports awards, but we call them "championships." The ESPYs are like the Kid's Choice Awards without the possibility of anyone getting covered in slime, unless they're sitting next to Brett Favre. 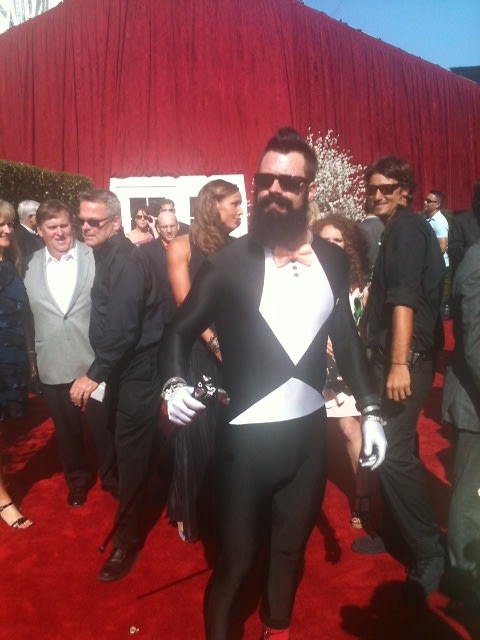 But one great outfit can change everything, and San Francisco Giants closer Brian Wilson has one great outfit here in the form of this "Spux," or Spandex Tux, which brought some much needed hilarity to a broadcast that generally seems to take itself way too seriously even when they're "joking around."

In case you're unfamiliar with Brian Wilson, a brief primer: he's the hard-throwing closer for the World Series champion San Francisco Giants who sports a gigantic jet-black beard, which has given rise to the fan-created mantra "Fear The Beard." He also has a clear lack of regard for behaving normally in public, as evidenced by the fact that he once convinced teammate Pat Burrell to appear with him on a TV interview dressed in the leather mask and fetish outfit of "The Machine" from the Nic Cage classic 8mm. When the interviewer asked why The Machine was lurking in the background, Wilson replied that he was "my neighbor" who "comes over for sugar." If you've ever sat through a mind-numbing, platitude-laden athlete interview before, you can understand why this is so great.

And now we have the Spux, the greatest leap forward in men's formal wear since the zipper-fly. While countless dudes have been made to feel like penguins in ill-fitting tuxedos, never before has someone really gone for the full penguin look with such gusto. Brian Wilson, I salute you, and I wish you further success both athletic and sartorial. Thanks for temporarily making the ESPYs watchable.